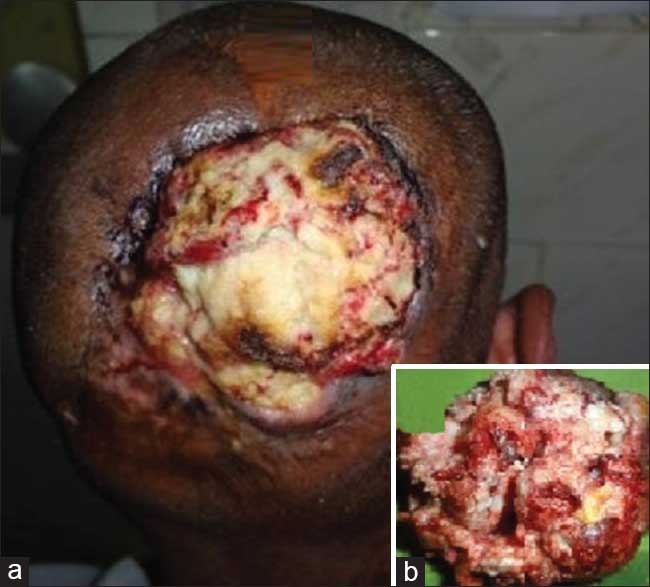 Too bad. Scars, especially on scalp, are quite sensitive and need close monitoring. Due to negligence and poor management scars can deteriorate causing complications as severe as Marjolin’s ulcer. Marjolin’s ulcer arises from chronic wounds as malignant tumors. Burn scars and pressure sores are open wounds which often give rise to Marjolin’s ulcer.

This is a case of 58-year-old man who experienced an injury during bear mauling roughly 50 years back, which means his childhood. The injury healed and produced a scar. It is necessary to know that scars also require prompt management otherwise they go through alternate sequence of healing and deterioration. Soon an ulcer was formed on the chronic scalp scar. The size of ulcer increased with each passing day. The appearance of scar became quite unpleasant. A cauliflower-like granulomatous mass had produced in the center. Blood and foul-smelling serosanguinous discharge accompanied the increase in size and white-colored granulomatous formation.

This is a case of Marjolin’s ulcer which is a quite rare complication that occurs due to trauma or negligence towards non-healing scars. It is a quite rare and aggressive development which is often epidermoid carcinoma in nature.

The patient belonged to a below-average locality where due to poverty and negligence the worsening condition of non-healing scar could not be prioritized. Upon examination the patient was conscious and had stable vital signs. The astounding revelation is that the patient didn’t report a fungating mass of 10 cm x 12 cm x 5 cm which extended up to the occipital region. The mass appeared pale white with breaks and cracks exposing hemorrhage and necrosis. The patient must be under extreme discomfort because living with a bleeding and foul-smelling necrotic mass on head is not least bit easy.

Further investigation was necessary to understand the nature of necrotic and hemorrhagic mass. The scrape cytology revealed squamous cell carcinoma. The right occipital and posterior triangle lymph nodes had undergone inflammation. Upon fine needle aspiration features of inflammation and reactive hyperplasia were found. CT scan showed right occipital extra-calvarial isodense lesion with underlying bone erosion and meningeal thickening. The scans and cytology tests reflected involvement of brain tissue, skull and meninges. Apparently, this case demanded scalp remodeling which urged to be a case of plastic surgeon but the involvement of neurological structures categorized it under the interest of neurosurgery.

After discussion between neurosurgeons and plastic surgeons it was concluded that patient required urgent definitive surgery for remodeling of skull and removal of invasive ulcer from the skull. Initially during the surgery, with the help of Doppler ultrasound the scalp vasculature was marked over the skin. The elderly patient rested in prone position. With the margin of 2 cm from the skin the lesion was removed. After exposing the underlying structures it was revealed that Marjolin’s ulcer had damaged the bone, dura matter and the tissue beneath. Now surgeons had to repair dura matter, concerned brain tissue and bone. In order to repair the damaged dura matter, G-dura patch was used whereas the abnormal cortical brain tissue was removed. The defected scalp was closed by a local rotation flap based on left occipital artery. Skin graft was used to repair secondary defect.

The patient had gone through immense suffering. However, he was equally lucky to achieve 100% flap survival. He was discharged a week later.