Home Extreme Proteus Syndrome in a 34-Year-Old: A Rare Case 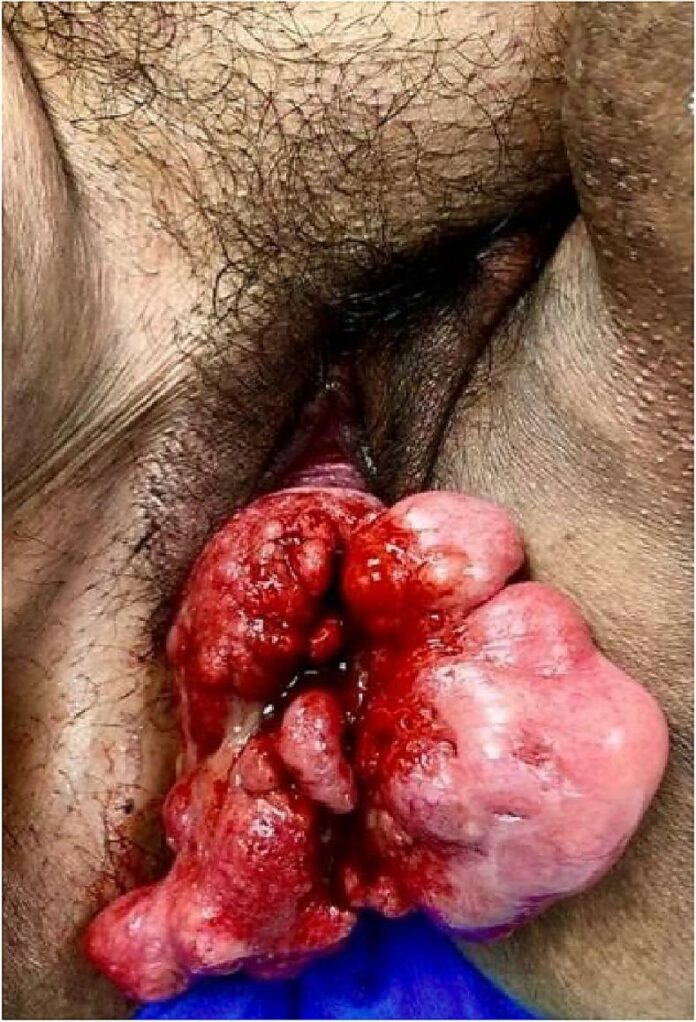 Proteus syndrome is a rare genetic disorder of progressive overgrowth in various tissue types. For example, connective, endothelial and epithelial tissue. Furthermore, this overgrowth can also affect internal organs such as the spleen and thymus. Proteus syndrome also has an association with a neurological malfunction, including seizures and hearing loss.

A 34-year-old female with a known history of Proteus syndrome presented to the outpatient clinic with concerns regarding prolapse. She complained about worsening vaginal discharge for a year. Additionally, she was diagnosed with proteus syndrome in infancy, secondary to multiple soft-tissue growths on her hand and forehead. Due to embarrassment, the patient had been reluctant to seek gynaecological care.

During the first gynecologic evaluation, a speculum exam revealed polypoid tissue prolapsing the field of vision. Hence, her doctors performed a transvaginal ultrasound that showed well-defined areas of multi-lobulated complex echogenicity within the vaginal wall.

The doctors discharged the patient after resolving her UTI, and a vaginal hysterectomy was scheduled for later. The surgical pathology revealed focal cervical intraepithelial neoplasia with benign endometrial polyps. The patient tolerated the procedure well and was discharged on postoperative day 3.

Proteus syndrome is a highly variable sporadic disorder characterized by asymmetric and disproportionate growth of body parts. It is frequently associated with plantar hyperplasia, haemangioma, lipoma and varicosities. Influence on skeletal and connective tissues may cause asymmetry of the skull, body, arm and legs.

Moreover, the molecular culprit of proteus syndrome is activating AKT1 mutation in post-azygous cells. The missense mutation leads to an unbalanced growth/apoptosis ratio between cells, which makes them more resistant to pro-apoptotic stimuli and more sensitive towards survival factors.

Proteus syndrome is a rare condition with a prevalence rate of 1:1,00,000. Newborns usually have few or no signs of the condition, with clinical manifestations of overgrowth becoming apparent in 6 and 18 months after birth. With time the tendency of the symptoms becomes more severe. Moreover, the diagnostic criteria for proteus syndrome are divided into “General” and “Specific.”

The general criteria for diagnosis of proteus syndrome and clinical evaluation include three major characteristics that have to be present. These are a mosaic distribution of the lesion, progressive course of said lesions, and sporadic occurrence of the disease . Nevertheless, the concomitant presence of these symptoms is mandatory regardless of the manifestations in a single patient.

Cerebriform connective tissue nevius is sufficient for diagnosis of proteus syndrome, with it being pathognomonic of the disease. A patient may also present with connective tissue nevi, but there are facultative, not obligatory. In other words, these nevi may or may not be present. These are commonly recorded on the plantar surface of feet but are also found on the abdomen, hands and nose. In patients with mild or ambiguous clinical findings, molecular genetic testing may help confirm the diagnosis.

The diagnostic tests for Proteus Syndrome include genomic sequencing, including genome sequencing or exome sequencing. The molecular tests employed in diagnosing Proteus syndrome analyze c.49G>A, p.Glu17Lys mutation. Invitae PS tests are an example of the tests that can help identify the AKT1 gene mutation. Analysis of multiple tissues, specifically punch biopsy of the affected region, may also be done.

In the treatment of Proteus syndrome, physical and occupational therapy play a significant role. A preferred treatment method is patient-centric since a general treatment plan does not fit the broad array of presentations associated with Proteus syndrome.

The administration of anti-coagulant medication is crucial in patients with deep vein thrombosis or pulmonary embolism. Moreover, the periodic examination is integral for patients of Proteus syndrome since it can help recognize predisposing symptoms of tumours.

Annual physical examination and radiography for patients with Proteus syndrome are also imperative. If significant pain exists, surgical removal of lesions is beneficial. Furthermore, in terms of medical care, rapamycin in Proteus syndrome has a positive impact.