Home Uncategorized This Surgeon Operated On Himself! 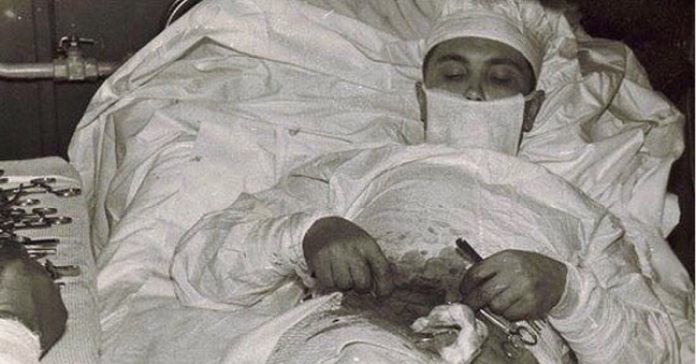 On the morning of 29 April 1961, Rogozov was experiencing moderate fever, nausea, general weakness and later presented with the symptom of pain his the lower portion of the abdomen. He had tried all conservative treatment measures but nothing seemed to be helping. The next day, his condition worsened. All his symptoms were an indication of localized peritonitis. However, unfortunately, the nearest research centre was at a distance of 1,600 kms in Mirny. Whereas, Rogozov was located in Novolazarevskaya.

What’s more, research centres in the Antarctic did not have an aircraft. In any case, the severe weather conditions weren’t in favour of landing an aircraft anyway. Rogozov has no other option but to operate on himself.

The operation started on 30th April at 22:00, with assistance from a driver and meteorologist who were passing the instruments and holding up a mirror to observe areas that were not directly visible. Bold move! Rogozov was half turned to his side in a semi-reclining position. For local anaesthesia of the abdominal wall, a solution of 0.5% of novocaine was used. Rogozov made an incision of 10 to 12 cm and proceeded to expose the appendix. After 30 to 40 minutes into the procedure, Rogozov experienced general weakness and nausea. Needing short pauses of rest repeatedly.

According to what Rogozov reported, the appendix had a 2×2 cm perforation at its base. He administered antibiotics directly in the peritoneal cavity. The operation was complete by about midnight. The signs of peritonitis disappeared after a brief period of weakness. After 5 days of the operation, Rogozov’s temperature was back to normal and the stitches were removed after 7 days of the operation.

In about two weeks, he was back to his regular routine!

Case of Narcolepsy with Excessive Daytime Sleepiness in Paediatrics

Case of Masquerade Uveitis with Hypopyon