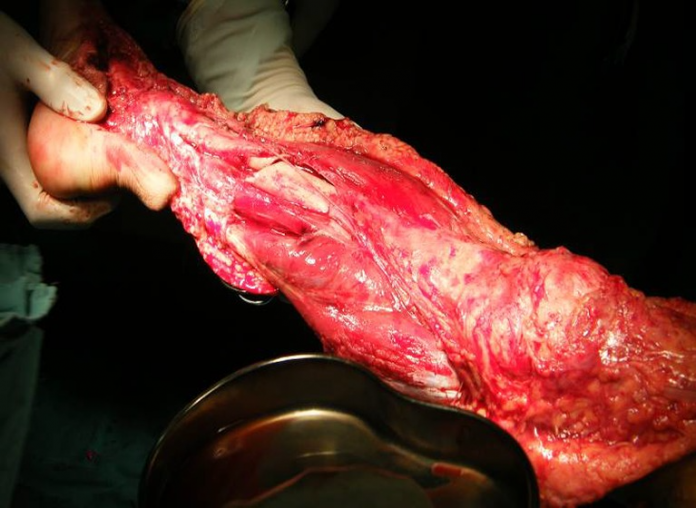 This case study highlights the management of a patient injured in the Wenchuan earthquake. The patient was brought to the emergency with a Gustillo classification, type III fracture. In addition, the medial side of the tibia and more than 5 cm of the fracture received fixed pressure with external fixation pins and shelves.

Similarly, vacuum sealing drainage (VSD) was performed combined with external fixation after thorough debridement. After the initial extensive debridement, the wounds were either covered or filled with a Poly (vinyl alcohol) shrink formaldehyde bubble using 16 silica gel, according to the size of the wound. The wound was then closed with Poly amino acid ethyl ester films after the Poly (vinyl alcohol) shrink formaldehyde bubble was stuck to the healthy skin.

The VSD was linked with a negative pressure aspirator followed by secondary sutures until significant wound healing.

During this time period, the dressings were not changed and negative pressure bottles were observed. Similarly, the regression of symptoms and limb swelling was also noted. The polyvinyl formaldehyde foam was removed after seven to ten days and wound infection control was assessed. In case the infection is not well controlled, further debridement is performed.

Osteoarticular allograft reconstruction of distal femur in a paediatric patient

Ulnar Nerve Injury Following a Comminuted Humeral Fracture: The First of its Kind