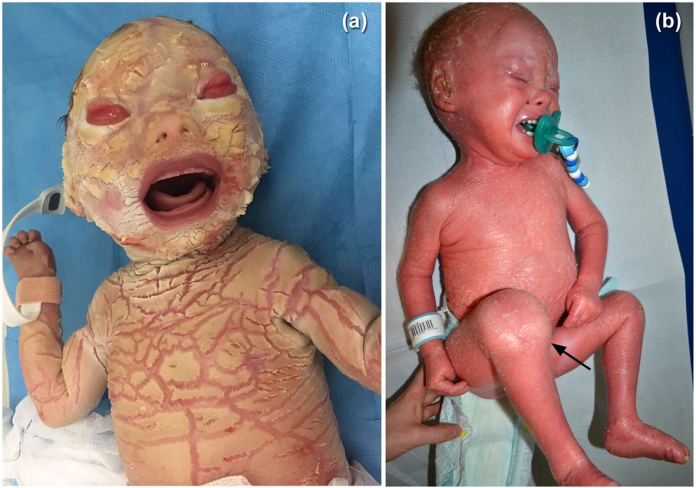 A boy weighing 2.300 g was born by cesarean section at 35 weeks due to Premature Rupture of the Membrane (PROM). The pregnancy was uneventful and the parents were not related.

The neonate was born with auditory ducts ending in the neck, dysmorphism of the ear cartilage, flattened nose, eclabium, ectropion, opaque plate-like keratotic scaled with deep red fissures and thickened skin. In addition, fingers and toes presented with pseudo-syndactyly, strictures and flexion contractures.

The neonate was started on oral retinoids since day one. Similarly, underwent global care to prevent or reduce extracutaneous complications and improve skin hydration. Skin treatment included ointments containing vaseline, paraffin oil and glycerin for six times a day. The vaseline was also applied on the eyebrows and scalp. The baby also underwent multiple platelets and red cells transfusions for anaemia and thrombocytopenia and intravenous antibiotics for recurrent sepsis.

Severe bilateral transmissive deafness was detected at 2 months because of otodisplasia. At 3 months, there was marked swelling of the right knee with a presentation similar to septic arthritis. The baby was initially treated with systemic antibiotics with an unsatisfactory response. Athrocenthesis with aspiration of yellow turbid synovial fluid and subsequent intra-articular injection of triamcinolone hexacetonide was administered. A year later, complete remission of the right knee was obtained with no side effects or limitation. Moreover, no other joints had been involved in the meantime.

Osteoarticular allograft reconstruction of distal femur in a paediatric patient

Ulnar Nerve Injury Following a Comminuted Humeral Fracture: The First of its Kind