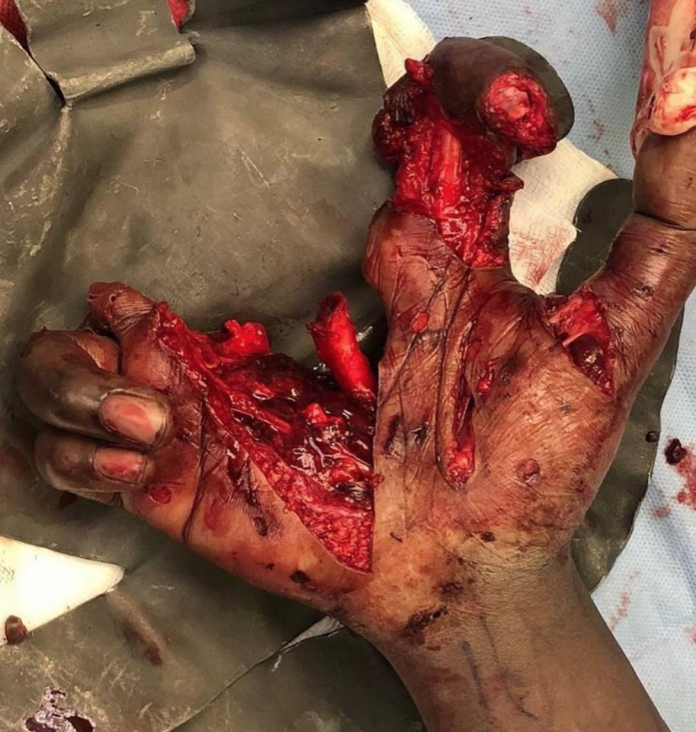 We present a pictorial case of a devastating hand injury following a firework explosion in a young male patient. The blast resulted in splaying of the hand with multiple fractures, neurovascular compromise and soft tissue loss.⁣

His ring and little finger were broken and his index finger had been ripped out of its socket during the blast.⁣

The 30-year-old patient was rushed to the accident & emergency department with his hand severed in two and a ‘degloved’ middle finger, meaning the skin had been completely torn off.⁣
⁣He had to have his right hand sewn back together and was left with four fingers following the horrendous accident.⁣

Firework-related hand injuries pose a significant surgical challenge due to the combination of burn and blast forces that can compromise the function of intact vessels and nerves making salvage and reconstruction particularly difficult. ⁣
⁣
Luckily, medics managed to salvage the patient’s hand using surgical wires to hold the bones in place and sewing his wounds shut.⁣But they were not able to save his middle finger and were forced to perform an amputation, leaving him with four fingers.⁣

Before being released from he was referred to a physiotherapist who coached him into performing a range of motion exercises. ⁣He was discharged but returned four weeks later to have the surgical wires removed. ⁣However, the patient did not attend a number of his hand therapy appointments, which compromised his rehab.⁣ As a result, after three months he was still struggling with stiffness in his hand.⁣
⁣
Source: @medicaltalks