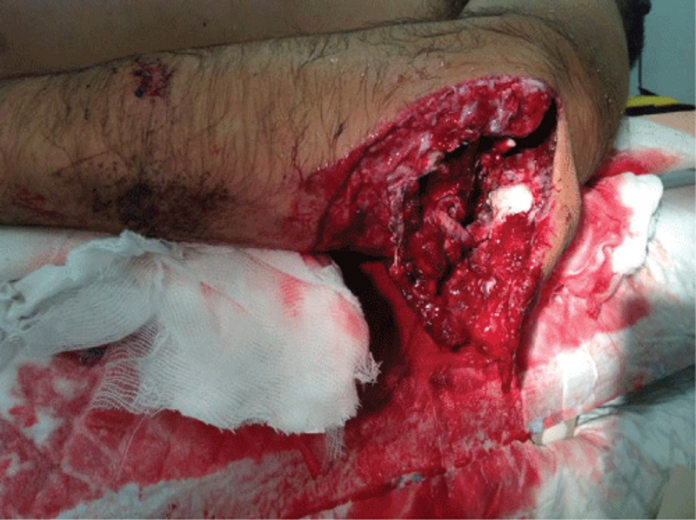 A 54-year-old male patient got into a motorcycle accident and presented to the emergency department with trauma in the left elbow. X-ray revealed comminution of the proximal ulna and distal humerus with bone loss of the articular surface of both.

A 54-year-old male waiter presented to the emergency department with trauma in the left elbow as a consequence of a motorcycle accident. The x-ray revealed comminution of the proximal ulna and distal humerus, including bone loss of the articular surfaces of both. He was started on antibiotic therapy with Gentamicin and Ceftriaxone, moreover, was immediately taken to surgery.

Physical examination revealed soft tissue injury with destruction of the medial and lateral collateral ligaments. However, the nervous and vascular structures were intact. The wound was surgically debrided with provisional fixation, external fixator and skin closure. The monitorized protocol was implemented for two weeks, after favourable wound healing.

After considering multiple treatment options, it was decided that internal fixation would not be possible because of the absence of adequate articular surfaces. For this reason, a total elbow arthroplasty was performed three months after the accident. With this approach, the triceps were reflected externally and the distal extremity of the humerus was regularised. The bone sequestra were removed and the ulna was prepared. A linked arthroplasty (Coonrad-Morrey total elbow arthroplasty) was applied and the extensor apparatus was directly inserted over the prosthesis. There was no need for ulnar nerve transposition.

X-ray revealed correct implantation of the prosthesis with adequate healing. The patient began rehabilitation two weeks later. Passive elbow motion gradually progressed to active motion. Similarly, the patient was capable of feeding himself six weeks later and began strength exercises. Six months later, the patient was back to work with no pain or sensory alterations.