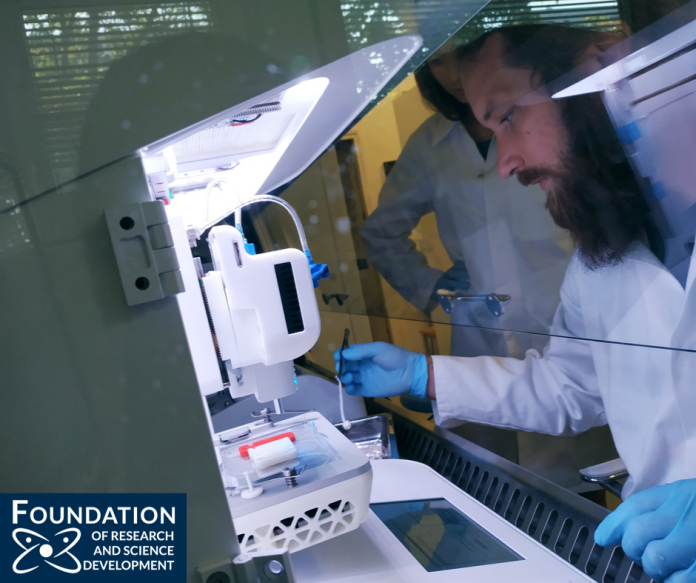 In 2019 a pioneering prototype of pancreas was printed by means of 3D bioprinting. It was fully vascularized and it positively completed all functionality and viability tests while being kept alive in a bioreactor prototype. This was achieved by a young and ambitious team of scientists from the Foundation of Research and Science Development (FBiRN) and BIONIC Consortium, led by prof. Michał Wszoła MD, PhD.

WHO claims that by 2030 type diabetes will be the seventh most common cause of death in the world. Nowadays, more than 40 million people worldwide suffer from type 1 diabetes. Unfortunately, not every case of diabetes is easily manageable. Many people, even though they try to cope with the disease according to the newest guidelines and using the most advanced technology, still experience serious and frequent hypoglycemia episodes. Moreover, the severity of complications implicated in type 1 diabetes is high and it includes damage to eyes, kidney and heart. For those people there are only two solutions: pancreas or pancreatic islet transplantation. Sadly, there are a few main issues associated with these solutions. Firstly, pancreas transplantation carries a high risk of surgical complications and also organ rejection. Secondly, both transplant types are dependent on deceased donors whose organs are valid for transplantation. These together result in a shortage of organs while the amount of patients on transplant lists increases daily.

A few scientific teams around the world are currently working on creating alternatives to pancreas and pancreatic islet transplantation. With the rise of 3D bioprinting, a group of scientists from Warsaw decided to develop an innovative medical therapy. After establishing the Bionic Consortium in 2017 they focused on creating a functional bionic pancreas, which has an enormous potential to become the first complete cure of type 1 diabetes. On 14thof March 2019, in the bioprinting laboratory of Foundation of Research and Science Development, scientists printed the first ever fully vascularized pancreas prototype, its size being 3x3x5cm. Two innovative bioinks were created solely for this purpose: enabling to bioprint with pancreatic islets and enabling to bioprint blood vessels with endothelial cells. The prototype successfully passed functionality tests, including glucose-stimulated insulin secretion assay. What is more, magnetic resonance imagining proved the existence of the planned vascular system.

This successful prototype encouraged the FBiRN team to improve their own-made bioreactor, while simultaneously advancing a perfusion fluid and vascular system. With all this happening, they decided to move on to animal testing. Currently, tests on mice are being conducted to assess the arising of vasculature between the bioprinted organ and animal’s body. They have already showed that developed bioinks are not toxic and can be implanted into animals. In the near future, the FBiRN group is planning on conducting further tests on bigger mammals (pigs). They also plan to replace pancreatic islets with alpha (produces glucagon) and beta (produces insulin) cells transformed from stem cells.

The main goal of Michał Wszoła MD, PhD and his team is to establish the European Centre of Medical Biotechnology. It will allow them to continue the research and start clinical trials, hopefully becoming the first bionic pancreas transplantation station worldwide. To achieve this goal they conduct not only scientific research. Foundation of Research and Science Development acts as a mediator between science and media. They are involved in many polish projects focusing on making science understandable and attractive.