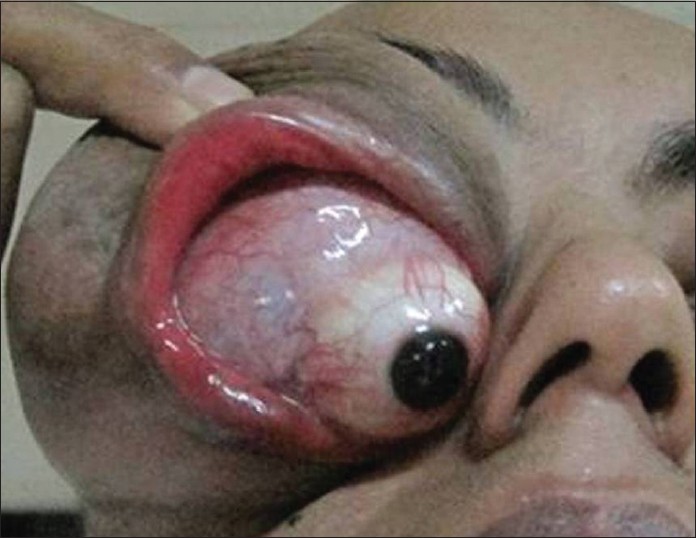 Eye in this neurological condition is the eye your eyes have never seen before!

Here is a case of young man of 22 years. According to him, there was a swelling in the upper lid of his right eye. It has been 16 years since the swelling protruded his eye. He managed living with it all those years but in the last six months he observed increase in the size of swelling. The increase in the size was accompanied with gradual decrease in the vision.
The swelling was quite large and eventually pushed the eyeball medially and downwards. The eyeball literally touched the nostril! The associated conditions included redness, loss of vision, pain, conjunctival chemosis and watering of right eye. If it were only redness, watering and pain then it might have been a case of inflammation of eye but the appearance screamed something else.

X-rays gave a hint towards real culprit.The sphenoid wing and occipital region in the skull had a defect which resulted in the widening of right orbital fissure as clearly shown in the figure below.

Spheno-orbital encephalocele is an extremely rare congenital condition in which intracranial contents herniate into the cranial cavity with or without meninges and CSF. In this case, temporal bone had herniated with CSF through greater wing of sphenoid on the right side into the right orbital space causing anterior displacement of right eyeball.

Right frontal craniotomy was performed. During the operation, the bony defect previously seen in USG results was present on the frontal and sphenoid bone which together make up the roof of right orbit. The bony defect extended up to the petrous temporal bone. Ultimately, surgeons exposed the encephalocele. The encephalocele was filled with CSF therefore surgeons opened and drained it cautiously. Moreover, surgeons excised the dysplastic brain tissue. As far as the skull base was concerned, pericranial flap repaired it.

The surgery was a success and the protruding eyeball became normal. The patient experienced slight ptosis in the right eye. He could count fingers at a distance of 4 feet and conjunctival chemosis had also resolved. However, the range of movement remained unchanged.