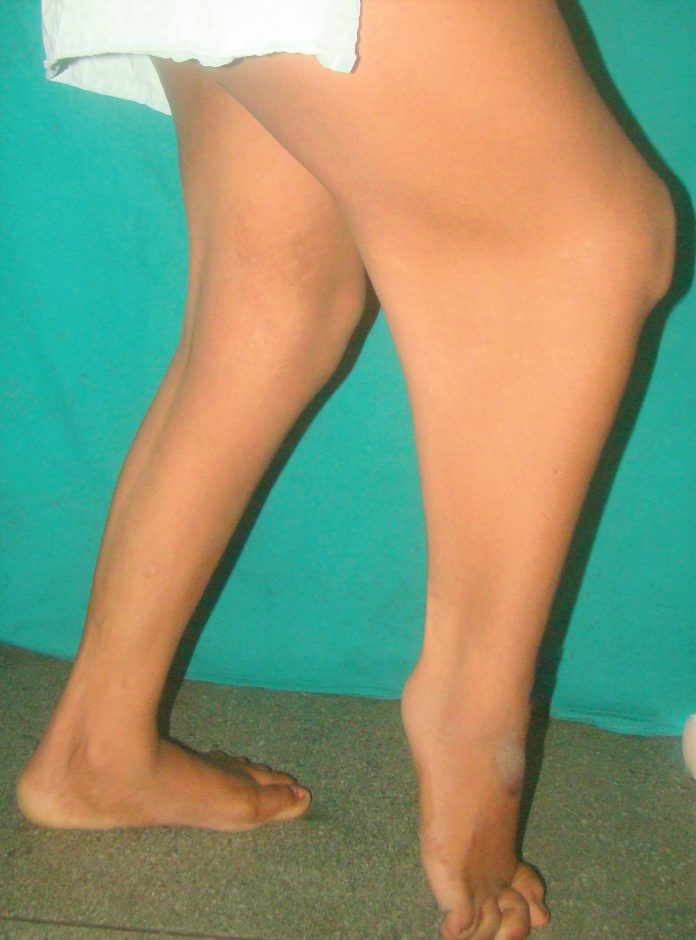 A web between thigh and leg of an 18-year-old female with operated cleft lip and cleft palate.

An 18-year-old female presented with complaints of two pits on the lower lip and a limping gait. The patient had a history of a surgical procedure done for cleft lip and cleft palate in her childhood, but no documents were available.

The patient had no remarkable medical history. She was a product of non-consanguineous marriage, born at term, and had no antenatal or postnatal complications. All her siblings were normal, too and there was no significant family history.

Physical examination of the face revealed a scar from the surgery of cleft lip on the left upper lip, other findings included:

Inspection of the oral cavity revealed:

Hypernasality and nasal resonance were evident in her voice, and she had bilateral mild conductive deafness.

On further examination, a pterygium was evident in her right lower limb from ischial tuberosity to the foot’s heel. The pterygium caused a flexion deformity of her right knee. An equinus deformity of the right foot was noticed along with distortion of the foot’s arches. There was heaping of skin on the right hallux eponychium.

Echocardiography was performed to look for cardiac abnormalities, but ECHO was normal, and no cardiac anomalies were noticed.

A working diagnosis of Popliteal Pterygium Syndrome (PPS) was made.

PPS is an autosomal dominant syndrome. Most cases are sporadic, with a rare incidence of approximately 1 in 300000 live births. The web between the thigh and leg, as seen in this patient, is the most characteristic feature of PPS, present in 96% of the cases. This web, called popliteal pterygium, along with cleft lip/palate, paramedian lower lip sinuses, genital and toenail anomalies, form the diagnostic criteria of PPS.

Under local anesthesia, the correction of upper lip scar and lower lip pits was done. The patient’s family did not want correction of the rest of the anomalies. Thereafter, the patient was lost to follow-up.

Cleft lip and palate should ideally be corrected within the first year of life; the popliteal pterygium should be released early on to allow the limb to grow properly.