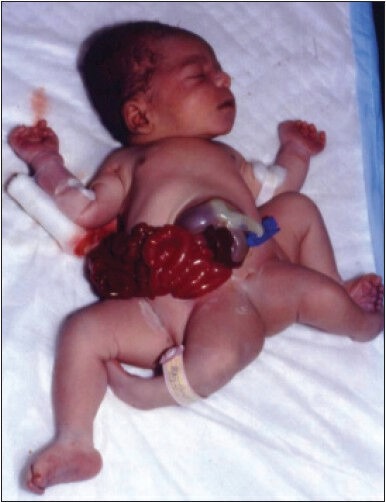 Dipygus, also called teras catadidymum, Monocephalus quadripus dibrachius, or monster twinned below, is a very rare congenital anomaly in which the affected individual’s body forks into right and left along the torso, with the duplication of the pelvis and the legs.

A famous American sideshow performer, Josephine Myrtle Corbin (1868 –1928) was born as a dipygus and lived her life normally, got married, and gave birth to 5 children, including 4 daughters and a son.

A male neonate was brought to the hospital 4 hours after birth. The baby boy was a product of non-consanguineous marriage, and he was born vaginally at full term. Postnatally, the baby was noted to have multiple anomalies, including tetrapagus.

The mother had not received prenatal care; therefore, prenatal diagnosis of the baby’s anomalies could not be made.

There was no history of similar or any other congenital anomalies in the family.

Out of the 4 lower limbs, the inner (middle) two limbs were hypoplastic. Meconuria was seen from the left external meatus.

A radiograph of the neonate’s whole body was performed, which revealed the segmentation of vertebral columns starting from the lower thoracic vertebrae caudally. The last 3 ribs on the left side of the body were duplicated and were bisecting the mid-thoracic vertebrae. Medial halves of the pelvic bones appeared hypoplastic. The femur of the right medical lower extremity was fractured. The attachment of the left pelvis to the vertebral column was higher than the right.

Two imperforate ani were noticed. The right one was a low anomaly, whereas the left one was a high anomaly, associated with a rectovesical fistula.

An exploratory laparotomy was performed which revealed a complete duplication of the gastrointestinal (digestive) tract from the terminal ileum till the rectum. The distal ileum, just above to the point where the duplication was seen, had a cystic dilation. Structures above the terminal, ileum, including the liver, spleen, stomach, duodenum, jejunum, and proximal, ileum, were single and normal. One of the duplicated ilea had a Meckel’s diverticulum. One of the duplicated rectums was seen opening into the left urinary bladder, while the other continued on the right side leading to low anomaly anorectal malformation.

Enteric cystostomy was done with the correction of the abdominal wall defect (primary closure). The surgery and the post-surgical course were uneventful.

Nine days later, the patient was taken for another surgery. The two medial (inner) limbs were amputated, the hypoplastic pelvic bones were resected and the lateral pelvic bones were approximated to reconstruct the pelvis. Further, Gallows traction was applied for the subsequent 2 weeks.

Another (third) surgery was performed when the baby was 6 weeks old.

During this surgery, the following procedures were performed:

The surgery was only planned and could not be performed because, unfortunately, on the 14th week, the baby was brought in with symptoms suggestive of aspiration pneumonia and septicemia. Despite management, 5 days later, the baby succumbed to death secondary to septicemic shock. Most likely, the sepsis was unrelated to the surgical procedures.