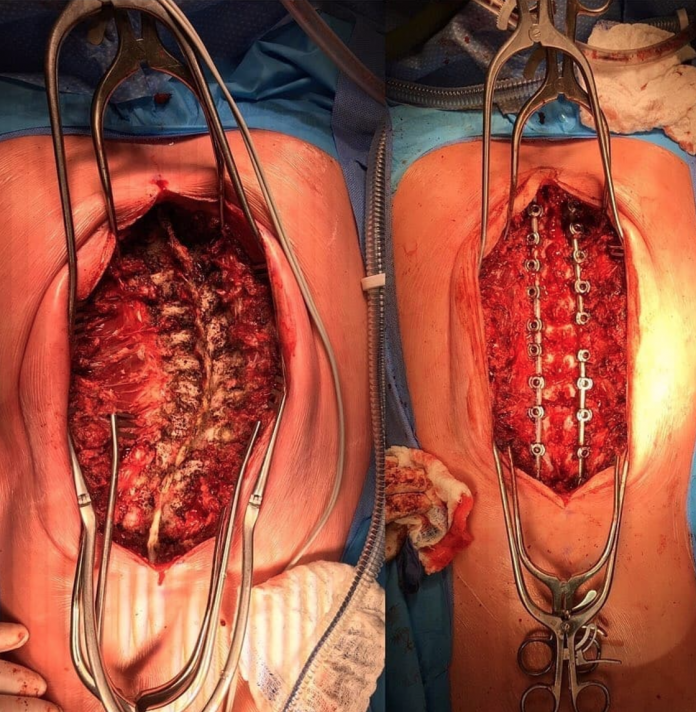 These are the operative photos of a 5 hour scoliosis correction/alignment surgery done in an 18-year-old female that was found to have idiopathic scoliosis when was 14.

Scoliosis represents a spinal deformity or disturbance of an otherwise well-organized 25-member intercalated series of spinal segments. It is, at times, grossly oversimplified as mere lateral deviation of the spine, when in reality, it is a complex three-dimensional (3D) deformity. 2D imaging systems (plain radiographs) remain somewhat limiting, and scoliosis is defined as greater than 10° of lateral deviation (sideways curve) of the spine from its central axis.

The major types of non-idiopathic scoliosis are congenital (due to malformation or faulty segmentation of the vertebrae) and neuromuscular scoliosis (due to muscular imbalance).

Doctors assumed her condition was connected to the genetic mutation of the FBN-1 gene, known as marfan’s syndrome. There were 3 curves in her spine; the upper thoracic curve was 25°, the thoracic curve was ~75°, and the lumbar curve was 55°. At mild angles, observation or bracing may be considered, however for patients with a Cobb angle of ≥50° surgical intervention is often necessary and involves the use of instrumentation systems in which hooks and screws are applied to the spine to anchor long rods, ensuring the correction of the curvature and its stability over time.
These instruments are surgically attached in a way that redistributes the stresses on the bones and keeps them in proper alignment while the bones of the spine fuse.

Her abnormal spinal curves were nearly fully corrected through dorsal surgery with stabilization. She spent 5 days in hospital, 6 weeks out of school and work, and about 6 month total recovery time.