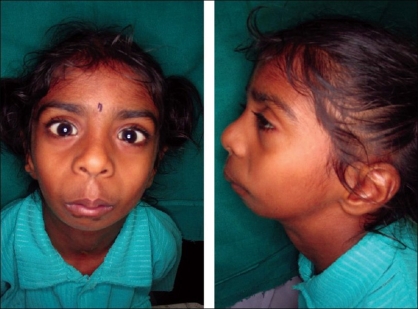 A couple presented their 5 years old boy to a clinician. The couple was non-consanguineous. Their eldest child was 7 years old and normal. The second child could not complete the intrauterine life of 9 months and died at seven months. The 5 years old boy was the third conception of the couple. The youngest child was only a year old and completely normal.

Upon inquiry, the couple informed the clinician about no trauma, drugs, exposure of harmful radiations and medicines. The 5 years old boy had an incomplete cleft of the secondary palate. He was born preterm at 32 terms via the vaginal route of delivery. He weighed 1.8 kg thus, kept in neonatal ICU for 7 days. The normal weight of a newborn baby is at least 3.5 kg. His head development was normal. According to the observation of parents, he started holding objects and smiling at the age of 2 and 3 months. Parents concern towards their child began after the first few months of birth. Parents didn’t notice any development of limbs after the age of 1 year. Due to the deformities of legs and hands he could not walk or hold things properly. Surprisingly, he had development bladder and bowel control by the age of 3 years.

Full body X-Ray revealed bilateral shortening of ulnar bones and bilateral absence of radii. Each hand had 2 carpal bones and 1 metacarpal. Lower limbs had calcaneum only. Phalanges, metatarsals and tarsals were absent. There was a bilateral absence of patella and bilateral shortening of tibia and femur. In the pelvis, there was pubic diastasis and vertical dislocation of the hip. Moreover, there was micrognathia and the incomplete cleft of the secondary palate. Lastly, there were hypodontic teeth.

X-Ray findings and physical examination aided in diagnosing the child with Roberts Syndrome.

Surgery was performed to fix the incomplete cleft of the secondary palate. Before surgery, the speech of the child was checked. He could barely pronounce monosyllabic sounds. There was a delay in speech. In surgery, there were no significant events and complications. The surgery was 60 minutes long and a success. As far as treatment for rest of the body is concerned plastic and reconstructive surgery is an option. Even after 2 years of surgery, there is a severe delay in speech.