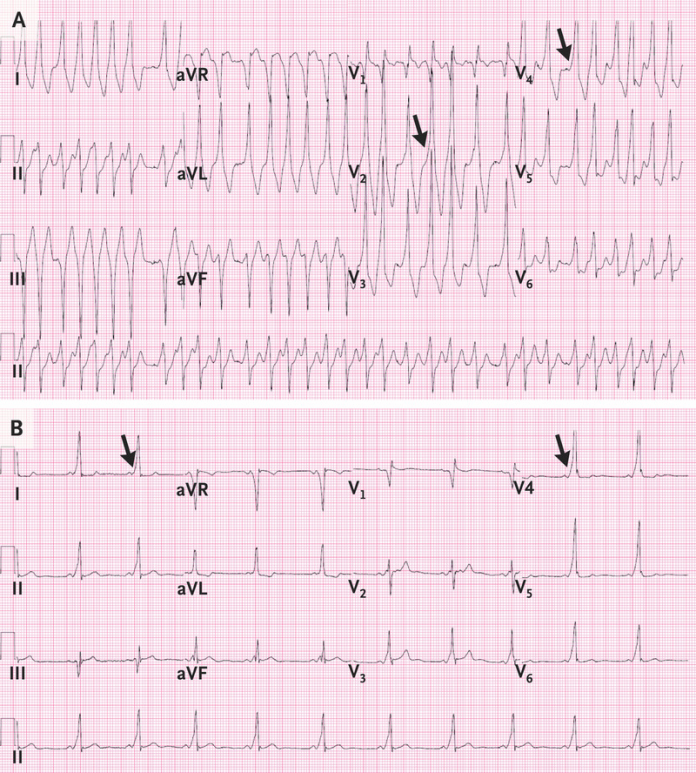 A 33-year-old man presented to the emergency department with complaints of palpitations after he passed out while getting his blood drawn.

A 33-year-old man presented to the emergency department with complaints of palpitations after he had passed out while getting a blood sample . On examination, the patient had tachycardia with a heart rate of 192 beats/minute and irregular rhythm.

The patient was advised an electrocardiogram which showed no P waves, irregular RR intervals and delta waves and wide-complex tachycardia. The findings were suggestive of the differential diagnosis of atrial fibrillation. The patient was administered 1 g of intravenous procainamide and electrocardiogram was repeated, which showed wide delta waves and QRS complex with short PR interval sinus rhythm. The findings were suggestive of Wolff-Parkinson-White syndrome.

In case of this 33-year-old man, an electrophysiological study showed right paraseptal accessory pathway anterior to the coronary-sinus ostium, which was successfully treated with radiofrequency ablation.

Atrial fibrillation can be lethal!

The patient showed no further palpitations, neither were any episodes of pre-excited atrial fibrillation seen in the following 18 months.