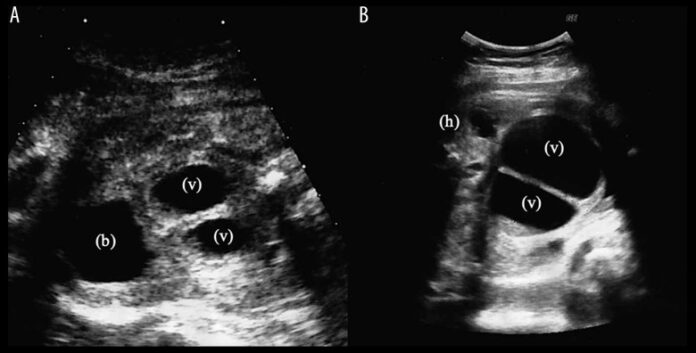 Persistent cloacal malformations are a very rare anomaly. They are anorectal malformations that occur in females. The abnormality in the formation of the urorectal septum at five to eight weeks gestation causes the urethra, vagina, and rectum to merge into a single tube. Furthermore, the cloaca only opens into the perineum. In such cases, prenatal ultrasound shows fetal ascites and cystic tumours in the abdomen. In addition to, hydronephrosis and oligohydramnios. Moreover, symptoms of persistent cloaca vary based on the type.

This case report is of a 38-year-old pregnant woman who underwent prenatal imaging, and the doctors made a diagnosis of persistent cloaca. She was referred to the hospital with a complaint of suspected fetal expansion of the intestinal tract. So, the doctors did a prenatal ultrasound that showed fetal growth restriction, fetal abdominal cyst, oligohydramnios, bilateral hydronephrosis. They suspected persistent cloaca. Furthermore, MRI revealed a double uterus, and bilateral hydronephrosis, hydrocolloids. All the findings were significant for persistent cloaca.

Doctors performed a cesarian section at thirty-six weeks and three days gestation, delivering a female infant. Moreover, the weight of the female infant was 1957g with Apgar scores of 9 (1min)/9 (5 min).

A cloaca is a common cavity in which the hindgut and allantois open. It separates into the urodeum and rectum at six weeks. This is followed by the fusion of the Mullerian duct with the mesonephric duct. It forms the uterine tract and, at the perineum, the urethra, vagina, and rectum. In cloacal anomalies, there is an impairment in the developmental process, resulting in the persistent cloaca. The incidence rate is 1 per 50,000 live births approximately.

Prenatal diagnosis is necessary since it can lead to a better outcome for infants with prenatal cloaca. Moreover, the image inspection shows characteristic findings. Hence, use of ultrasound and MRI confirmed the diagnosis of persistent cloaca susception.