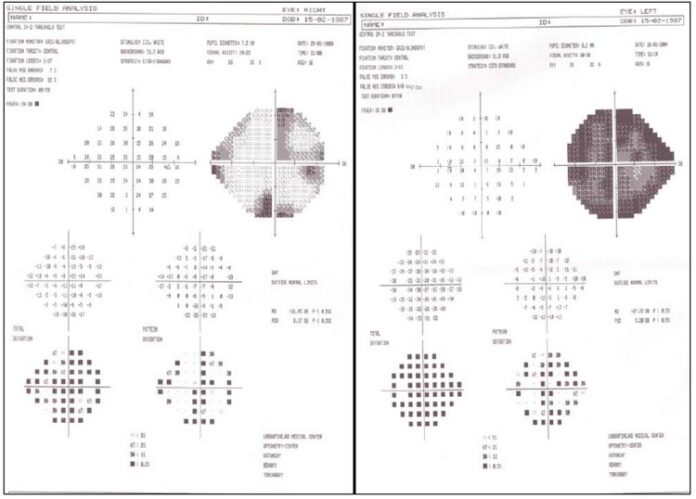 A 15-year-old Iranian boy experienced mild vasovagal shock right after his MR vaccination, for which the doctors managed him accordingly. He suddenly had a loss of vision in both eyes together with headache and dizziness, six hours after recovery.

A local ophthalmologist reported that visual acuity was hands motion in both eyes. His pupillary light reflexes were poor, which made the determination of RAPD (relative afferent pupillary defect). Furthermore, fundus examination in both discs had blurred margins. However, extraocular and slit lamp examinations were unremarkable. Other tests, for example, CBC, ESR and blood chemistry were normal, in addition to MRI. However, due to severe loss in vision, visual fields were not performed.

A 17-year-old male patient had severe vision reduction in his right eye 7 hours after his MR vaccine. When the doctors examined him, his visual acuity was 20/400 and 20/20 in his right and left eyes. Moreover, RAPD was +2 on the right side. External ocular, fundus and slit-lamp examinations were unremarkable in both his eyes. After the diagnosis of retrobulbar optic neuritis, he was treated with IV methylprednisolone therapy. However, the patient declined it. Other tests, for example, CBC, ESR, brain and orbital MRI showed no abnormal findings.

Although optic neuritis usually occurs a month after MR vaccination, in these two cases it occurred within 24 hours of receiving it.