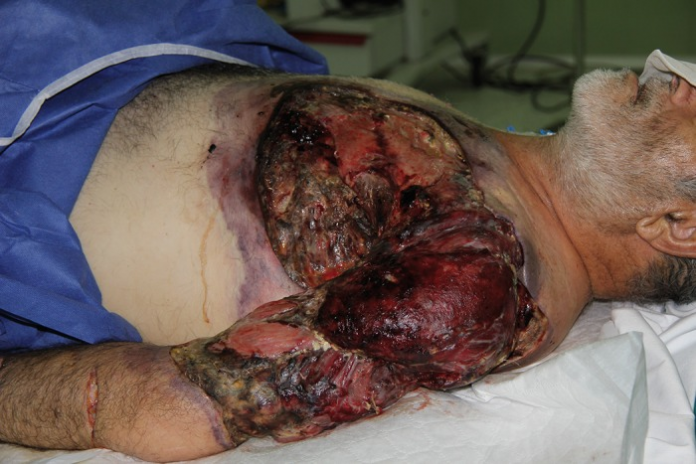 A 66-year-old male patient presented to the hospital with extensive fasciitis and cellulitis involving the axillary region and left chest wall. The patient’s history revealed that 2 months ago the patient had a traumatic injury that caused swelling and tenderness in his left arm. He also had a history of coronary artery disease and uncontrolled diabetes mellitus. The patient had undergone several debridements of soft tissue necrosis and therapy with broad spectrum antibiotics.

The patient was diagnosed with necrotising fasciitis. Finger probe test was performed to confirm the diagnosis.

After evaluation of the wound, the patient was transferred to the ICU. Treatment plan included amputation of the extremity a day after the patient’s admission. He was further prescribed high-dose clindamycin, vancomycin and 24 million units of crystal penicillin after testing cultures from the patient’s wound, blood and urine.

However, the patient developed postoperative complications, including a low haemoglobin and a 2.5 mg/dl creatinine, in addition to a post operative blood sugar of 331 mg/dl. The antibiotics regimen was adjusted accordingly. The patient became lethargic and was intubated with mechanical ventilation because of respiratory distress.

The patient was diagnosed with acute tubular necrosis on the second postoperative day.

There was progress in the patient’s metabolic acidosis and there was an increase in creatinine levels. He was given Lasix and 2 units of packed cell. However, the patient developed low blood pressure on the 3rd postoperative day. He was prescribed a dopamine drip, however, did not show any improvement. The patient developed assystole and bradycardia on the same day and was given CPR. Unfortunately, the CPR was unsuccessful and the patient died.

Proteus Syndrome in a 34-Year-Old: A Rare Case