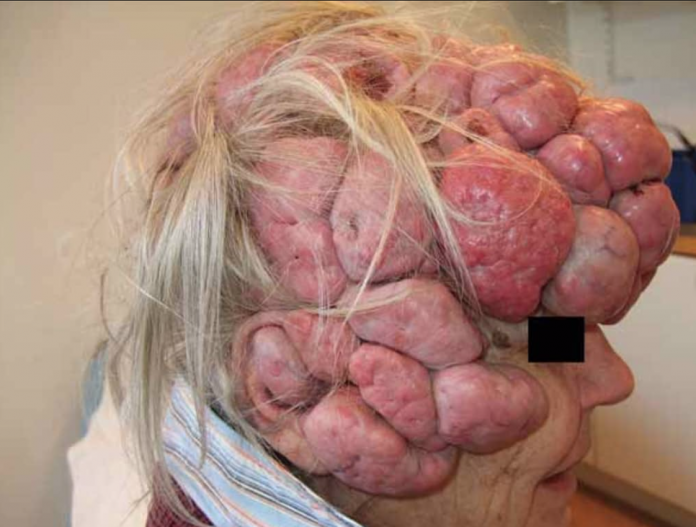 A 65 year old woman was referred to the Department of Hand and Plastic Surgery in Umeå University Hospital. She had suffered from multiple tumors, foremostly present in the scalp and face, for the predominant part of her adult life. The patient was reluctant to seek medical help, instead choosing to avoid social interaction and wearing a hat covering the scalp tumors. According to the patient, several of her close family members suffered from similar tumors. A previous histopathological examination confirmed the diagnosis to be cylindromatosis.

The patient recuperated well following both operations. The graft take after both operations was excellent, with almost 100% coverage after 2.5 weeks. At a follow-up 4 months after the first procedure, the aesthetic result of the operation was excellent. The patient was eventually supplied with a fitting wig, covering the grafted area. She experienced a great improvement regarding self confidence and social interaction capabilities, with an improved quality of life.

Familial cylindromatosis is a rare autosomal dominant disease, causing a prolific development of tumors originating from the adnexa of the skin. Although benign in most instances, the tumors are more prone to arise in the craniofacial region, causing the patient a great deal of practical and aesthetic discomfort. Furthermore, there is a potential risk of the cylindroma turning malignant and giving rise to cylindromcarcinoma, particularly in the case of multiple scalp cylindromas.