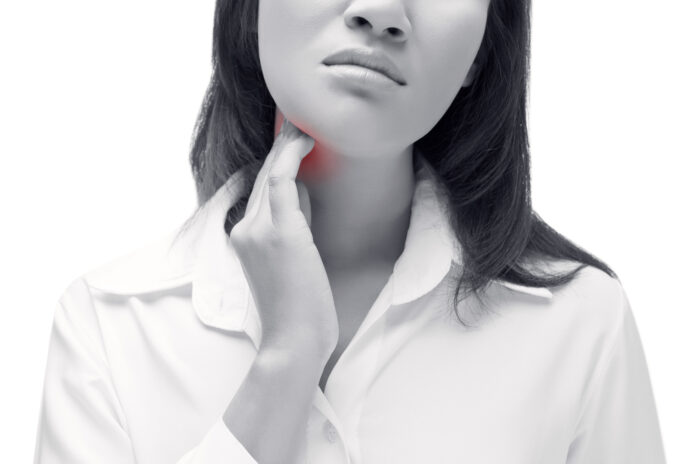 A 44-year-old woman presented in the hospital with swelling in her neck and face for four days. She had a history of fibromyalgia and Bechet’s disease for twenty-five years. She underwent several therapies in the past for her condition, which include, azathioprine, cyclophosphamide, methotrexate, and adalimumab. A subclavian central venous port was placed a year ago for immunotherapy administration. Chest X-ray revealed subcutaneous emphysema of the neck.

She claimed to have no recent history of trauma, dental treatments, complaints of fever, vomiting. She also said that she is a non-smoker and does not use drugs either.  Physical examination ruled out oral ulcers and dental abscesses. Moreover, the ENT examination was non-significant.

Further investigations included a CT scan of the chest and bronchoscopy. CT- chest ruled out pneumomediastinum and other suspected pathologies that could result in this rare presentation. Similarly, the bronchoscopy did not show any findings either.

The patient’s symptoms resolved spontaneously within a few days.

The Theory Behind the Symptoms

One of the theories is that Behcet’s disease can predispose the patients to subcutaneous emphysema. However, the cause of the complications is inconclusive. Moreover, since she had a subclavian central venous port for administering drugs, it increased the possibility of air being sucked through the insertion site. Probably due to transmission of negative intrathoracic pressure to the perivascular space. However, the doctors did not remove the port because of spontaneous resolution and the inconclusiveness of the assumption.

Subcutaneous Emphysema causes painless swelling of the tissues. It is mostly under the skin of the neck or chest and there is crepitus on palpation. The predisposing risk factors include trauma, pneumothorax, retching, cough, or any endoscopic procedure. Furthermore, most cases resolve spontaneously. Only a few result in severity, for example, compartment syndrome and hemodynamic instability. In conclusion, the complication is rare and manageable.