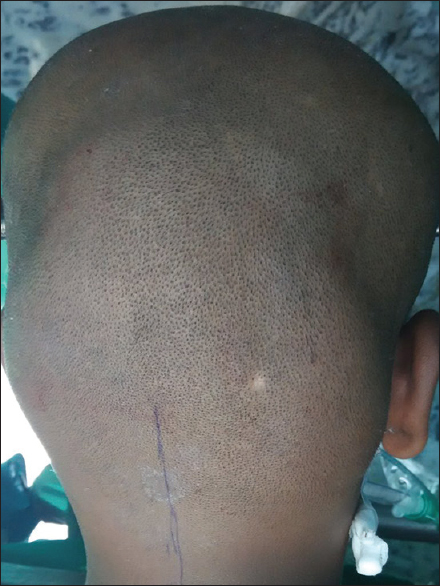 In this case, a young boy aged 15 years had a swelling at the back of his head since 5 years. He had normal birth history and his neurological examination was also normal. Upon taking history he revealed that 5 years ago he had fallen from height and suffered from a linear occipital fracture. Shortly after the incident a mass appeared at the site of fracture which continued to swell. 5 years later, it had reached a considerable size of 12 cm × 7 cm × 4 cm. Since 2 weeks, he had dull headache in the occipital region. It always becomes a matter of survival in such cases!

CT scan revealed a mass containing cerebrospinal fluid (CSF). Moreover, the bone density between inner and outer tables of occipital bone had reduced severely. Close study of results showed defect in the inner table. Therefore, the mass was in direct connection with fourth ventricle as well.

MRI was necessary to confirm the details. It also revealed a CSF-filled mass which is in connection with fourth ventricle. The history of trauma to head and results of imaging scans helped in diagnosing the patient with Growing Skull Fracture (GSF) in posterior fossa. Screening of the cervical spine showed syringomyelia extending from craniovertebral junction (CVJ) to C3 vertebral body level.

What are Growing Skull Fractures (GSF)?

Generally speaking, leptomeningeal cysts develop when there is a fracture in the inner table of a bone while the outer table remains intact. With fracture there is also laceration of the dura matter which results in accumulation of cerebrospinal fluid in a sac. Arachnoid matter lines the leptomeningeal cysts. This mostly occurs when there is a trauma to the head which commonly includes falling from height and being hit by a blunt object with force.

In this case, surgeons repaired the defect in bone and dura matter. In surgical approach, watertight repair of the dural defect was done using pericranium and then reinforced with fibrin glue. Defect of the outer table was repaired using Osteomesh. Osteomesh is a bioresorbable implant which promotes vascular and tissue growth. The patient recovered well without any complications.

6 months later MRI of cervical spine showed reduction in the size of syrinx.