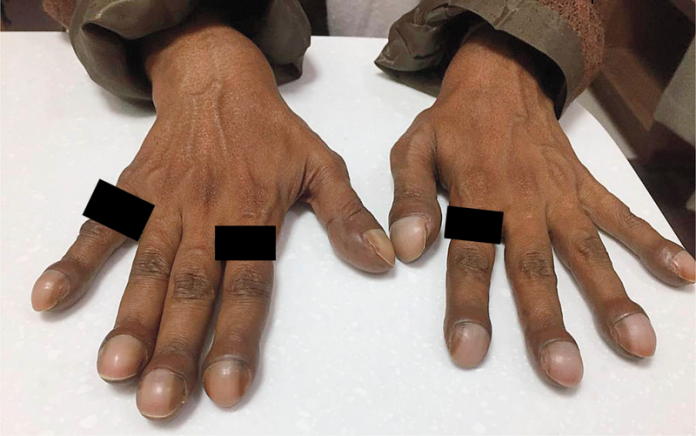 50-year-old male patient with history of cryptogenic cirrhosis reported to the gastroenterology clinic with a 2 year history of progressive shortness of breath. Transthoracic echocardiography showed abnormal intrapulmonary vascular dilations that lead to intrapulmonary shunting. Patient was diagnosed with hepatopulmonary syndrome.

A 50-year-old male patient presented to the gastroenterology clinic with a 2 year history of progressive shortness of breath because of exertion. The patient also had a history of cryptogenic cirrhosis.

Physical examination showed finger clubbing, spider nevi, splenomegaly, pedal oedema and ascites. Lung and heart auscultation revealed no abnormal sounds. The patient had an oxygen saturation of 94%, as measured by pulse oximetry while breathing ambient air and in supine position. Similarly, the oxygen saturation was measured at 88% when in an upright position.

Further examinations including arterial blood gas analysis showed a partial pressure of arterial oxygen 60 mm Hg and an alveolar-arterial oxygen gradient of 54 mm Hg with the patient breathing ambient air while seated. To confirm the diagnosis, a transthoracic echocardiography with intravenous agitated saline showed opacification of the chambers by microbubbles five heartbeats after microbubbles appeared in the right atrium, on the left side of the heart.

The findings of the analysis were suggestive of abnormal intrapulmonary vascular dilations that lead to intrapulmonary shunting. Moreover, a diagnosis of hepatopulmonary syndrome was made.

Hepatopulmonary syndrome is a syndrome that causes shortness of breath and low oxygen levels in the blood of arteries (hypoxia) caused by broadening of the blood levels (vasodilation) in lungs of patients with liver disease. This makes it difficult for the red blood cells to absorb oxygen.

The cirrhosis was medically managed in the patients and diuretics were initiated. However, the patient had persistent shortness of breath at 4-month follow-up.