Home Medical Cases Case of painful rash on hands and elbows, a manifestation of leukemia... 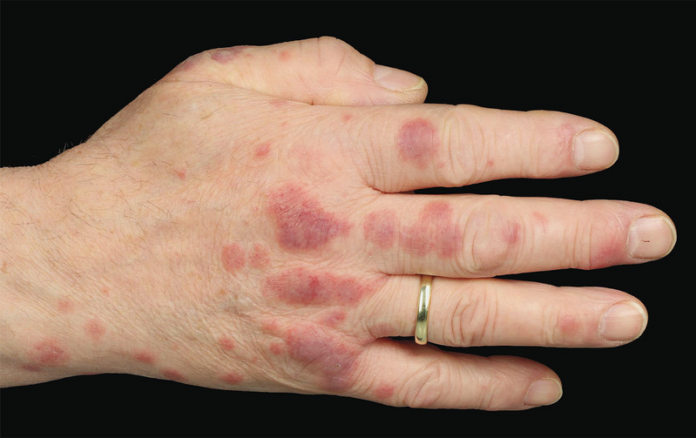 This article describes the case of a 65-year-old with leukemia cutis, who presented to the dermatology clinic with a 5-day history of a painful rash on his hands and elbows. The patient had no other symptoms. Physical examination was consistent with symmetric erythematous and purplish plaques on the dorsa of both hands and elbows.

Leukemia cutis is defined as an infiltration of neoplastic leukocytes or their precursors into the epidermis, dermis and subcutis (the bottom layer of tissue that contains fat cells). This results in clinically identifiable cutaneous lesions. In this case the patient presented with multiple cutaneous nodules on her hands and elbows. Similarly, laboratory examination showed an increase in white-cell count of 16,000 per cubic meter and platelet count of 70,000 per cubic millimetre. For further examination, doctors biopsied the skin lesion on the left elbow. The findings were consistent with perivascular lymphocytic infiltrate in the dermis. And stained positive for myeloperoxidase, CD123, Ki67, and CD68.

Based on these findings, the patient was diagnosed with leukemia cutis

He was urgently referred to the oncology clinic. Bone marrow biopsy showed 15% to 20% blasts and molecular mutations in ASXL1, NRAS, SRSF2, and TET2. Doctors diagnosed the patient with myelomonocytic leukemia. Treatment include stem-cell transplantation. Two weeks after the transplantation, the patient’s skin changes resolved and he has been in remission since.

The role of a dermatologist in diagnosing leukemia cutis is instrumental and makes a significant difference in prognosis. A delay in diagnosis leads to poor prognosis and correlates with extra-medullary involvement. This may also alter the appropriate treatment regimen and may be one of the reasons it is rarely reported. As stated in a study, “Acute myeloid leukemia presenting as leukemia cutis was rare with reported incidence ranging between 2.9 and 3.7% probably due to paucity of diagnostic facilities and lack awareness among dermatologists and physician”.