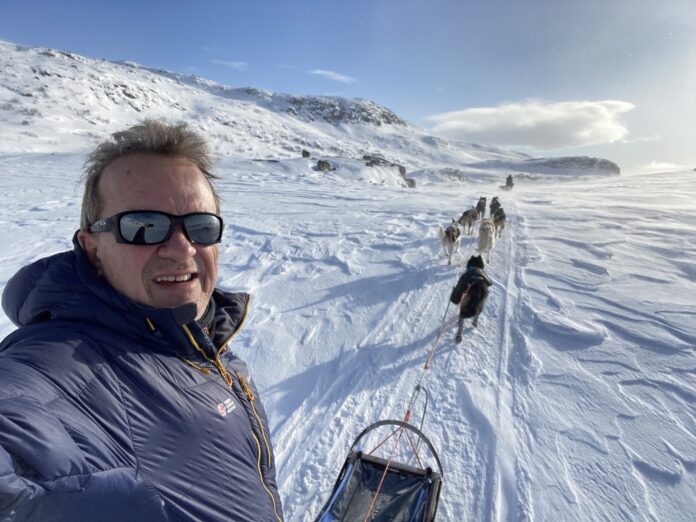 Climbing mountains, swimming across crocodile-infested rivers, surviving in sub-zero temperatures, all in a day’s work for Mark Hannaford. An adventurer at heart, Mark mostly spends most of his days rescuing people, and their dogs, from falling off cliffs. And on some days, you’ll see him training medics to survive in extreme conditions. So, how did he get from leading expeditions to training medics?

“I’m quite surprised to be where I am.”

Mark Hannaford always had a passion for going on and leading expeditions, whether hiking in Nepal or wild camping in the Namib Desert. At the age of 23 or 24 years, he realized this passion could help him make a living. And that’s how he began organizing expeditions to countries across the world.

When he began leading expeditions professionally, businesses would often send medics as part of his team if anybody required emergency assistance. However, he noticed that these medical professionals were often ill-prepared for the kind of extreme conditions they would go through on an expedition.

“I wanted professionals who were well-prepared to be in the environment we were working in and were as comfortable as us. But also, comfortable to be directed by an expedition leader who might have wider situational awareness than they might have”

Thus, he began training medics as part of his team to work in the same environment as him. So, they could become equal colleagues and allies on these expeditions. He wanted them to be well-prepared for all challenges that may come their way. Soon he had created a community of medics who could work in any environment. His courses were top-rated among medical professionals. They began to push Mark to develop public courses for more and more healthcare professionals.

At his first public course of extreme medicine, 70 doctors showed up. Since then, the program has just grown and grown to include a raft of courses, the world’s largest subject matter conference, the annual WEM Conference. The first-ever MSc in Extreme Medicine delivered in partnership with Exeter University Medical School in England and Clinical Fellowships in Extreme Medicine in several UK hospitals.

“What we’re doing in extreme medicine is only really limited by our imagination.”

“You know, medicine doesn’t attract people who don’t care about people. So, there are people who’ve chosen medicine because they care. It’s a very worthwhile and rewarding career, But it’s also very tiring and stressful. Nor the most straightforward of careers. I wanted to show people they can still be doctors and nurses and paramedics, but also combine it with adventure.”

Don’t let the name fool you, though. As part of the program, you’re not just learning to survive the cold or preventing dehydration in the Namib Desert. Instead, medics also learn team-building skills, problem-solving, and the skills to manage crisis situations. As a result, medics return to the medical system with a greater appreciation for things they may have taken for granted, improved leadership & teamship skills, and a propensity to tackle challenges head-on.

According to Mark, his program opens doors for people, providing them with a way to combine their extremely worthy careers in medicine with adventure.

“I followed a passion I really, really enjoyed.”

As exciting as extreme medicine sounds, it is also full of challenges and stressful situations that test your limits.

Mark recounts an expedition where he and his team were crossing a river in Angola. They had decided to swim across as the current wasn’t too dangerous. The plan was to use the current to get to the rock in the middle and then swim the remaining comparatively easier distance across.

“We must have been about four to five meters away from the rock when the rock stood up. And it jumped into the water. So, the sleeping crocodile that was our big rock was now in the water, and now our rock was smaller. We landed on the rock, and we went across the river. But then we had to swim back across the river. We knew there were crocodiles.”

Mark remembers the panic that began to set in at that moment. He wanted nothing more than to get out of that crocodile-infested water. But he also knew that panic could result in him drowning rather than getting eaten by a crocodile.

“Sometimes it’s slowing everything down, taking a step back and going, ‘Okay, what is the big risk here?’ And trying to break it down into surmountable problems. So, the first thing was to stop panicking. The next target was to look where the riverbank was and get onto the bank. And then the third challenge was to scale the muddy bank and out of the river.”

According to Mark, breaking such challenging situations into bite-sized pieces can help you come out of that crisis and deal with the stress.

“Sometimes, it’s not the big stuff that gets you; it’s the small stuff. The fact that you have to pay your tax, or your rent, or your car has a puncture. You know, all that small stuff builds up. It takes a degree of learning to realize that sometimes you need to stop, get some exercise or talk to your friends. Talking to your friends and offloading is incredibly important.”

“You can’t be good at every element of medicine. So, you need to find what really, really interests you. You know, the topic that you’re happy staying up till midnight or two o’clock in the morning learning.“

According to Mark, one might enter the field of medicine with a certain idea in their head. And over time, those interests may change; you might realize you want to pursue a completely different type of medicine. Therefore, he advises medical students to try and experience as many different things as possible.

Moreover, he urges medical students to engage in discussions with people across different medical fields. So, they can have a chance at discovering what they’re good at, what makes their heart beat faster – life is an adventure!

Mark has always believed in contributing and organizes the annual not-for-profit WEM Conference, a gathering of the most maverick, inspiring and exciting medics in the world. It takes place every November, and it’s a gathering we are sure you would enjoy! https://www.extrememedicineexpo.com

Mark can be contacted via Linkedin or mark@extreme-medicine.com

Interview was made as a joint project of MEDizzy and in4Med Conference.