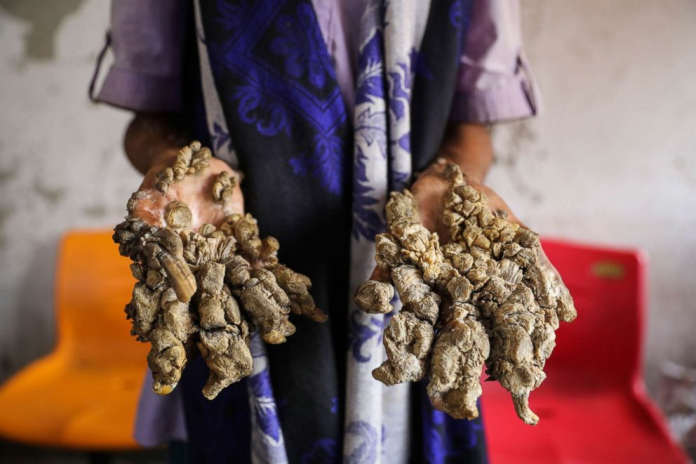 Mahmoud Taluli, a man in Gaza with an extremely rare skin condition, “tree man syndrome” says his life changed after surgical treatment. The 44-year-old man, in the last two years, underwent two surgeries to remove extensive wood-like lesion on his hands. Before surgery, he hadn’t been able to use his hands for more than a decade.

“After years of suffering and solitude, I can finally live a normal life,” Taluli told NPR. “I can play with my children. I can go to family events. I no longer need to cover my hands when I go out in public.”

Taluli suffered from a rare genetic condition called epidermodysplasia verruciformis. The condition made his skin more susceptible to skin infections caused by human papilloma virus, compared to other average persons.

People with this condition have a weak immune system that prevents them from fighting off HPVs which includes a group of 150 related viruses. HPVs often do not cause any symptoms in healthy people, however, with epidermodysplasia verrucifromis, the infection causes wart-like skin lesions, which is 50 percent of the cases progress to malignant tumours.

There is no standard cure or treatment for this condition. Tauli’s treatment involved doctors making deep incisions in the skin to remove lesions. Often the tissue removal required skin grafts from other parts of the body to help with the process of healing.

The treatment allowed Taluli to use his hands again

Although the treatment allowed Taluli to use his hands again, it is not a cure. New growths continued to show up and Taluli will need a fifth operation for the removal of these lesions and some scar tissue. Despite it, treatment has been largely successful in removing the lesions.

“We didn’t know if there would be anything viable left of his hands, but thank God it’s working.”

Doctors are hopeful to ultimately develop a treatment that would help Taluli’s immune system fight the HPVs better.