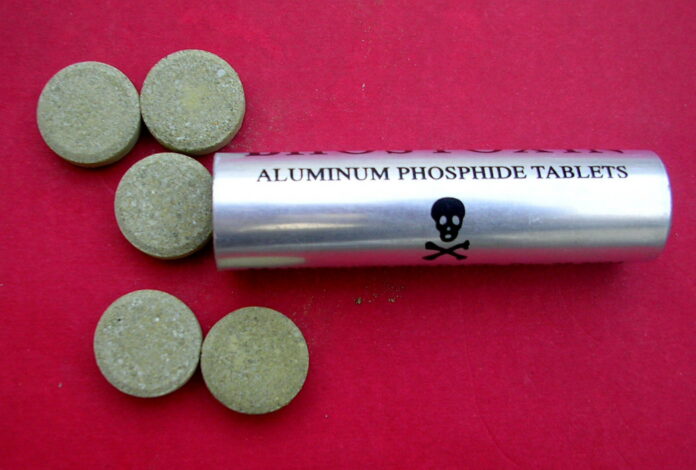 Aluminium phosphide is highly toxic in nature. The toxicity of Aluminium phosphide is due to the release of phosphine gas on exposure to moisture and acidity of the stomach. After ingestion, the phosphine gas rapidly accumulates in the respiratory or gastrointestinal tract. This leads to systemic toxic effects involving the multiple organs causing pulmonary oedema and metabolic acidosis.

The mechanism of toxicity involves cellular injury due to the release of toxic and highly reactive free radicles. It also inhibits the cytochrome c oxidase and causes failure of cellular respiration. The level of catalase activity is decreased and superoxide dismutase activity is increased. This further damages the cells.

This article describes the case of a 30-year-old Iranian woman with aluminium phosphide poisoning. The patient comes to the emergency with a complaint of nausea, vomiting, and urine and stool incontinence. She had hypotension, hypoxemia, and severe metabolic acidosis. The patient had a past medical history of depression and irritable bowel syndrome. However, she had no history of poisoning or drug toxicity. Also, the patient’s family history was irrelevant.

The doctors performed a general physical examination which revealed her body temperature was 36.5°C. Her blood pressure was 90/60 mmHg. Moreover, the patient had tachycardia with a heart rate of 110 beats/min. In addition, she also had tachypnea with a respiratory rate of 35 breaths/min. Her oxygen saturation level was 88%. The patient’s general look was ill and dull. Although, all other examinations were normal.

On further investigations, the doctors performed an electrocardiogram(ECG) which revealed sinus tachycardia. Moreover, the computed tomography scan of the chest showed mild pleural effusion and the collapse of the lower lobe of the left lung.

The patient was successfully managed by supportive treatment. The doctors admitted the patient and initiated the mechanical ventilation. She was given hypertonic dextrose 50%, high dose intravenous regular insulin, and potassium to maintain their normal serum level. Moreover, the doctors treated her with sodium bicarbonate and hydrocortisone. The intravenous pantoprazole for stress ulcer prophylaxis and subcutaneous heparin for deep vein thrombosis prophylaxis was also provided. The normal saline for initial hydration and diazepam for sedation also worked out well.

The treatment of aluminium phosphide toxicity is mainly conservative. This includes gastric lavage with coconut oil or sodium bicarbonate, gastric ventilation, whole blood exchange transfusion, magnesium sulfate infusion, and proton pump inhibitors. However, the efficiency of all these treatments is still in doubt. However, more studies are required to confirm their efficiency.

How does Glucose-Insulin-Potassium(GIK) therapy work?

The intravenous infusion of dextrose and insulin was first introduced in patients with beta-blocker and calcium channel blocker poisoning. It had positive beneficial cardiac inotropic effects and improved the condition of the patients. Both, calcium channel blocker poisoning and aluminium phosphide poisoning have similar metabolic abnormalities. Both of them result in hyperglycemia, insulin resistance, and metabolic acidosis.

Glucose-Insulin-Potassium (GIK) was first introduced in 2008 as a possible treatment for rice tablet poisoning. The Glucose-Insulin-Potassium (GIK) acts as a fuel substrate for the myocardium under stress conditions. It enhances the uptake of carbohydrates by myocardial tissue. Moreover, Insulin therapy works as an inotropic agent for the heart and improves peripheral vascular resistance. It also reverses metabolic acidosis which is common in rice tablet poisoning.

In one of the studies conducted by Hassanian-Moghaddam et al in which out of 88 aluminium phosphide poisoning patients, 44 of them received insulin infusion. This had a significant effect on improving the survival rate. Although, the study has some limitations such as a small sample size.

As soon as the patient is diagnosed with aluminium phosphide poisoning, immediate management should be given. Unfortunately, there is no antidote for aluminium phosphide poisoning. However, the patient should be provided with supportive care. Any kind of delay can cost the life of a person. Intensive therapy and supportive management along with the consultation of a medical toxicologist can increase the chances of survival of the patient.