Home Medical Cases The fascinating journey of growing the ear! ?? 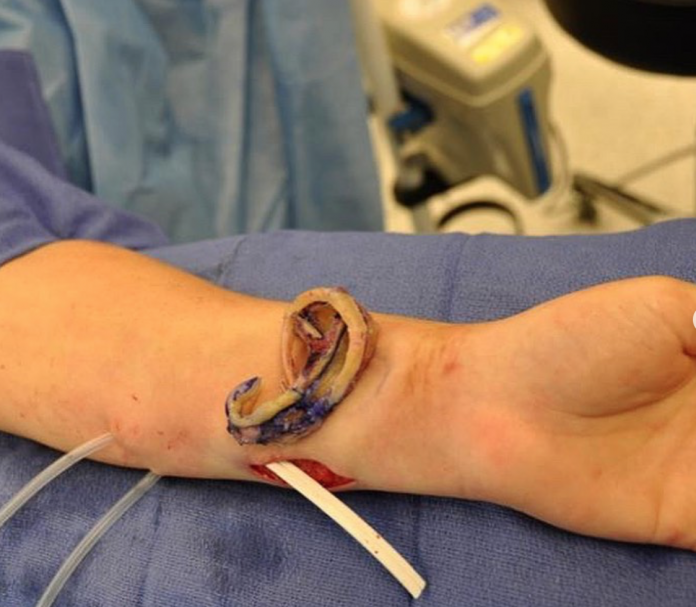 Doctors have attached a new ear to a cancer patient that was grown on her own forearm, built from her own tissue!
The groundbreaking procedure, described as one of the most complicated ear constructions, involves removing cartilage from the rib cage to form a new ear, which is then placed under the skin of the forearm to grow.

It all began in 2010, when a sore in her left ear was diagnosed as a rapidly spreading basal-cell carcinoma, a type of skin cancer.

In October 2012, she was told the cancer had spread to her ear canal. She went through a 16-hour procedure to have the entire ear, neck glands, lymph nodes tissue and part of her skull removed.

Doctors described to her how modern prosthetic ears have to be fixated somehow and sometimes fall off. But her skull bone had been removed, so the only way of attaching a prosthetic would be through tape and glue. They both agreed that wasn’t an option.
She has been the first patient to receive a new procedure that uses rib cartilage to build an entirely new ear, molded to look like her right ear.

The ear was inserted under the surface of her forearm under a piece of expanded skin. There it was allowed to grow for several months to grow a layer of blood vessels, cells and nerves around it, until surgeons deemed it ready for the transplant to her head.
After four months, the ear was removed from her arm and re-attached to her head.
The entire process took 20 months.

This fascinating approach adds to an expanding body of research into artificially grown human replacement tissues and organs. It is relatively early days for this technique, but research is moving fast in this area and we will undoubtedly hear more about it in the future.
Reconstructive surgery like this is just one of many innovative medical advances that we can expect to witness moving forward.