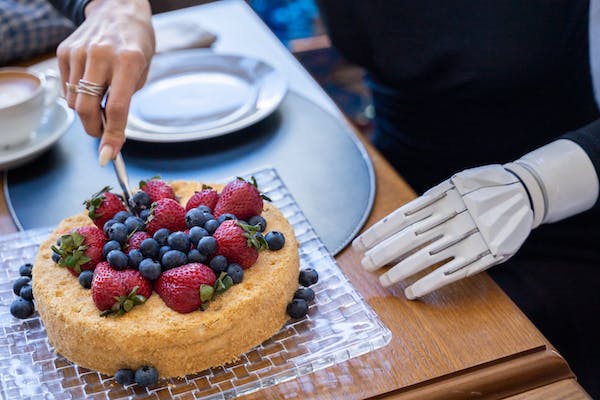 A partially paralyzed man was able to feed himself again for the first time in thirty years using a robotic arm and his own mind. The man’s brain signals allowed him to control two prosthetic arms, enabling him to do impossible tasks once again. For example, cutting a slice of cake and eating it by himself.

This technological discovery has been described and published in the journal Frontiers of Neurorobotics. It relies on the brain-machine interface for making a direct connection between the brain and the computer.

Moreover, the man’s upper body was paralyzed, and he was unable to even use his fingers. However, he was able to move his fists responding to the prompts. Neuro signals were underpinning these motions, which were further translated by the electrodes implanted in his brain and were used for controlling the robotic arm.

The man was able to feed himself using the robotic arm following instructions. For example, “cut food” and “eat food”. Nevertheless, the machine was controlled with his mind through the brain-machine interface. Moreover, it was worth the celebration after being unable to feed himself for more than thirty years.

Furthermore, the study had been going on for a long time, building over fifteen years of research. However, despite that, it failed to give hope to people with sensorimotor impairments.

The authors wrote in the paper,

The new study has demonstrated the possibilities with minimal human input required. Most of the heavy lifting is done by the robot. Additionally, the user can tailor their behaviour based on their needs and suitability.

The first author of the paper Dr David Handelman said,

The technology is still being tested and optimized, which makes it off clinical implementation. However, there is room for improvement according to Tenore. Since it relies on continuous visual feedback. With more research, the authors are hopeful for it to work out.

Dr Pablo Celnik concluded that it can be used to help beyond daily activities.