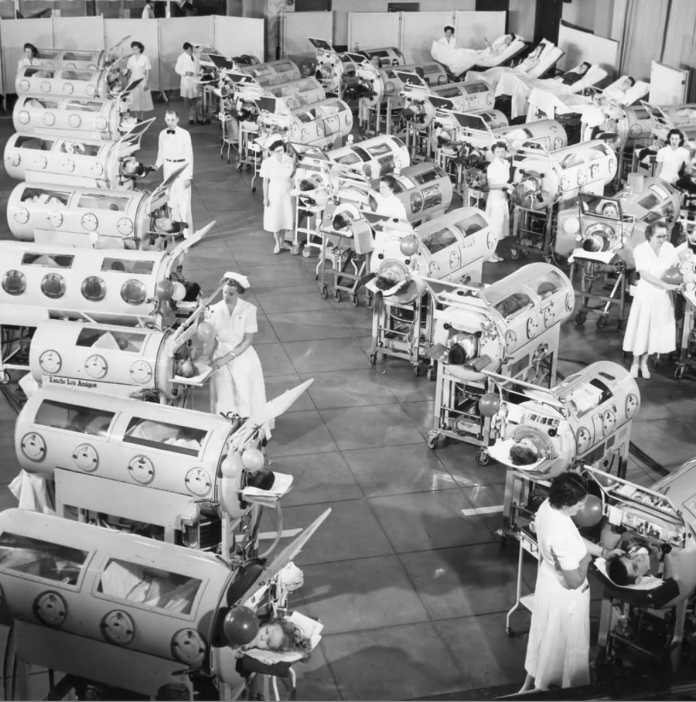 Polio is a crippling and sometimes fatal virus that has been all but wiped out in the developed world. A highly-infectious disease, polio attacks the nervous system and can lead to paralysis, disability and even death. The symptoms – pain and weakness, fatigue and muscle loss. One of the major breakthroughs was the invention of the iron lung, a body-encasing machine that fills lungs with air by making the chest rise.

Physicians who treated people in the acute, early stage of polio saw that many patients were unable to breathe when the virus’s action paralyzed muscle groups in the chest. Death was frequent at this stage, but those who survived usually recovered much or almost all of their former strength. Nothing worked well in keeping people breathing until 1927, when Philip Drinker and Louis Agassiz Shaw at Harvard University devised a version of a tank respirator that could maintain respiration artificially until a person could breathe independently, usually after one or two weeks. The machine was powered by an electric motor with two vacuum cleaners. The pump changed the pressure inside a rectangular, airtight metal box, pulling air in and out of the lungs.

Thanks to a vaccine program in the 1960s, Polio has been eradicated, though it remains a problem in Nigeria, Afghanistan and Pakistan (WHO, March 2018). The poliovirus can easily be imported into a polio-free country and can spread rapidly amongst unimmunized populations. Failure to eradicate polio could result in as many as 200 000 new cases every year, within 10 years, all over the world. There is no cure for polio, it can only be prevented. Polio vaccine, given multiple times, can protect a child for life.

Painful medical instruments in past