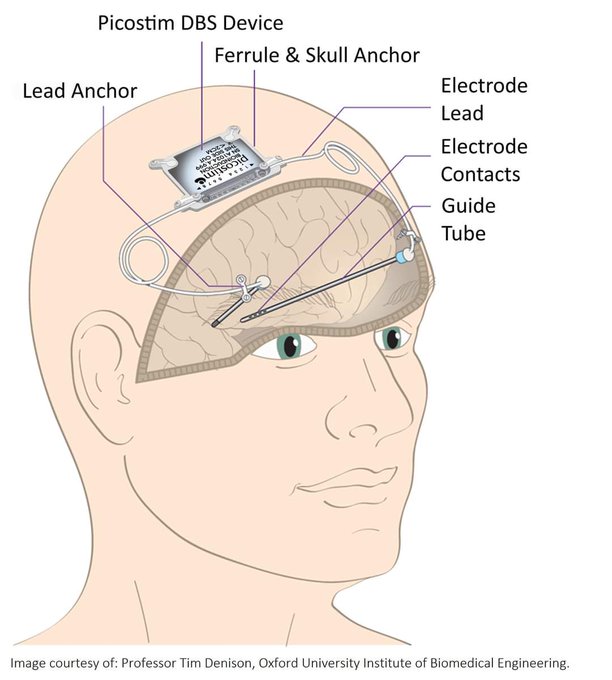 Tony Howells is the first patient to get a miniaturized brain implant for treating Parkinson’s disease symptoms. His description of the experience and improvements generated by the device was “amazing”. The deep brain stimulation (DBS) device was fit in November 2020. He says that he can walk several miles at a time now and play golf as well. Neither of the two was possible for him before the implant.

Parkinson’s disease is a neurodegenerative disorder. It affects the brain and body. Moreover, it leads to muscle stiffness, tremors, and a decline in cognitive skills. Although there is no cure for Parkinson’s, DBS is a promising device for the treatment of motor dysfunction in some patients.

The device targets brain regions through direct electrical stimulation. But the cost of the device, including the insertion complexity is very high. Hence, only five percent of patients with Parkinson’s around the world currently have it. The systems that currently exist have a very large battery size, which is difficult to insert beneath the skull. So, the batteries are placed in the chest and are connected to the brain with wires that run through the neck.

The researchers in North Bristol in the UK are conducting a clinical trial for a mini-DBS system. It will be one-third in size compared to the existing device. Furthermore, it contains a small battery that can be implanted directly to the skull. The battery can stimulate the brain and no cumbersome cables will be in need.

There is hope that this system, which is simplified will speed up implantation surgery, in addition, make it cheaper and less complex. Hence, the DBS device is said to be a more viable option for most patients.

The ongoing clinical trials consist of twenty-five patients. The new device will be fitted, and they will be under monitoring for a year.

Dr Alan Whone who is the lead researcher said in his comment about the initial success,

Benefits of the Treatment

Whether the trial is successful or not, the treatment will only benefit ten percent of patients with Parkinson’s. When he spoke to BBC News, he explained, that this device will not be suitable for the elderly and those with memory loss.

What is Parkinson’s Disease?

Parkinson’s disease affects one percent of the population above the age of sixty. The disorder has an association with the loss of dopaminergic neurons in the substantia nigra in addition to the presence of Lewy bodies. The majority of cases are idiopathic and about ten percent of cases have a genetic cause, which is usually in younger patients.

The onset of the disorder is slow but progressive. The first symptom of the disease is tremors and later, it is associated with rigidity and bradykinesia. During the late phase of the disease, postural insufficiency is also seen, and it can have an impact on the quality of life. Furthermore, the presence of autonomic symptoms can precede the motor functions in some patients. Doctors make the diagnosis based on the clinical presentation and history. They also perform SPECT scans in cases that are doubtful to rule out any neurological disorders.

The disease affects one or two people per one thousand at any time. Moreover, the prevalence of PD increases with age affecting one percent of the population over the age of sixty. Five to ten percent of patients have genetic predispositions. In addition, there is an increase in incidences with advancing age.