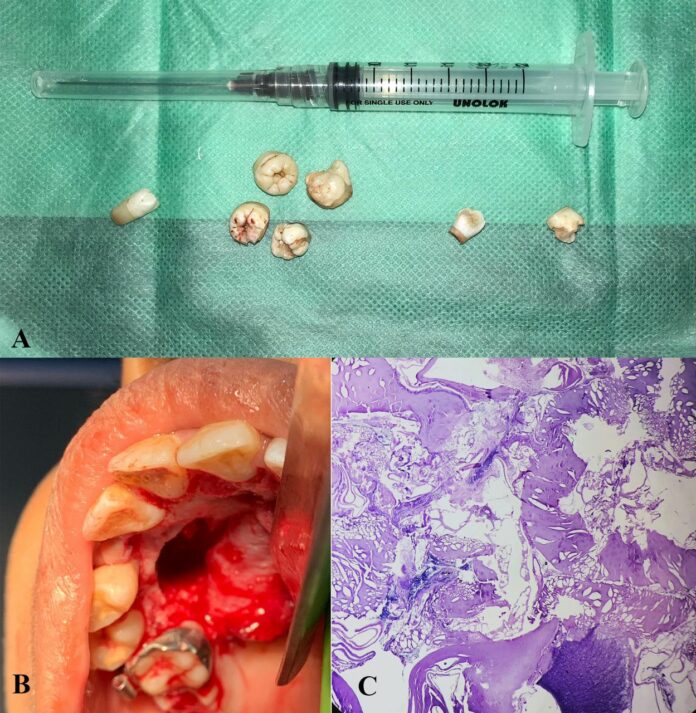 This article presents the case of a teenage girl with multiple complex odontomas of the jaw.

She reported to a dental clinic with a complaint of multiple missing and maligned teeth. When doctors performed a panoramic radiograph, it showed impacted maxillary canines and multiple radiopaque masses in both jaws. Based on the radiographic findings, doctors gave a provisional diagnosis of multiple complex odontomata. Moreover, cone Beam CT exhibited four radiopaque tooth-like masses on the palatal aspect of the right maxillary second premolar and first molar. Additionally, one mass was also present on the palatal side of the left impacted canine. Moreover, in the mandible, one mass was present lingually in the canine and premolar regions on both sides.

Doctors planned the surgical removal of these masses under conscious sedation and local anaesthesia. Additionally, maxillary lesions were removed by raising a palatal flap from the first molar on the right side. Moreover, to the second premolar and on the left side while preserving the nasopalatine nerve. In the mandible, the lingual mucoperiosteal flap was raised to remove these masses while preserving the lingual nerve.

Histopathological analysis showed evidence of mature enamel, which is subjected to the decalcification process, dentin and cementum intermingled with pulp-like tissue in a disorganized manner along with ghost cells, confirming the diagnosis of multiple complex odontomas. The two years follow-up showed no signs of recurrence and the impacted canines were retracted orthodontically.

Odontomas are the most commonly occurring benign odontogenic tumours. They are considered to be hamartomas rather than neoplasms. Moreover, they consist of various tooth components like dentine, cementum, pulp tissue, and enamel. They develop from an alteration of differentiated mesenchymal and epithelial cells that give rise to ameloblasts and odontoblasts. Other than that, they can occur at any age but are usually detected during the second decade of life and are slightly more common in females. The aetiology of an odontoma is unknown. However, certain factors such as trauma to the primary dentition, infection, growth pressure and genetic mutations may contribute. Multiple odontomas are usually associated with hereditary anomalies such as Gardner syndrome, basal cell nevus syndrome, familial colonic adenomatosis, Herrmann syndrome and Bader syndrome.

They are usually asymptomatic and most lesions are detected on routine radiographs. The commonly occurring signs and symptoms include retained deciduous teeth as they interfere with the eruption of succedaneous teeth and may cause swelling, cortical bone enlargement, or pain.

Radiographic and Histological Features of Odontomas

They can be divided into three development stages according to the degree of calcification. In the first stage, the lesion appears completely radiolucent due to the absence of mineralization. The second stage is characterized by partial calcification and in the final development, stage odontoma appears as a radiopaque mass surrounded by a radiolucent zone.

The histological examination of odontoma often shows the presence of enamel, dentin, pulp tissue and cementum. The compound odontoma resembles the normal tooth, while the complex odontoma appears as a disorganized mass of hard dental tissue.

Moreover, odontomas are treated by conservative surgical enucleation and there is little probability of recurrence. Sometimes orthodontic intervention may require repositioning the arch.