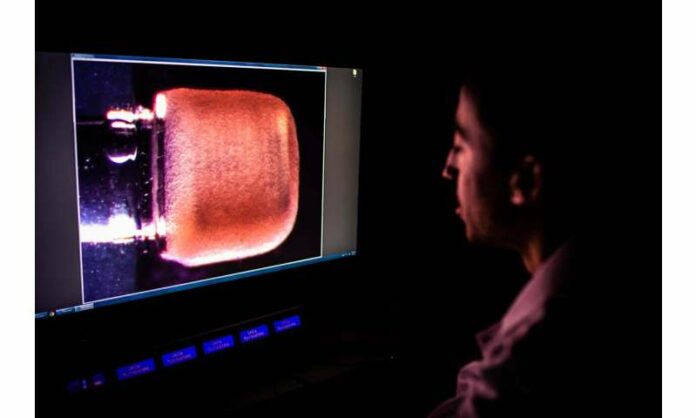 There isn’t any safe way to get a close-up view of the heart. It cannot be taken out of the human body, looked at and put back in. Moreover, different methods have been tried by scientists to get around this problem. They have tried hooking cadaver hearts to machines for making the heart pump again; they have attached lab-grown tissues of the heart to watch it expand and contract.

However, each approach has flaws of its own. For example, reanimated hearts beat for a limited time and springs cannot do not replicate the force of real muscles. Getting an understanding of this organ is necessary as someone dies of heart disease every thirty-six seconds in America.

Hence, engineers, biologists, and genetic engineers have developed a new method of studying the heart. A miniature heart replica in addition to a combination of nanoengineered parts and human heart tissue has been made. Furthermore, it beats itself without any external power or springs. It is driven by the live heart tissues that are grown using stem cells. This device gives researchers an accurate view of the mechanism of the organ; allowing the researchers to track the growth of the heart in the embryo. It also helps them in studying the impact of diseases on the heart, testing its potential effect or side effects on new treatments without any risk to the patients. They don’t even have to leave the lab.

The gadget is nicknamed miniPUMP and is led by Boston University. It is known as the cardiac miniaturized Precision-enabled Unidirectional Microfluidic Pump officially. They look forward to building other lab-based versions of other organs, for example, the lungs and the kidneys. All the findings are published in Science Advances.

The researchers say that the device can speed up the process of drug development, making it cheaper and faster too. It will prevent the drug from moving through the developmental process, eventually failing when tested on people. Moreover, it will not cost millions, and neither will it take decades. The miniPUMP can be used to detect the outcome of the research.

The project is a part of CELL-MET. The goal of the centre is to regenerate the human heart with the disease, building a community that can test new drugs. Moreover, creating artificial patches that can be implanted for hearts that are damaged due to heart diseases.

A lot can go wrong with the heart and when it is functioning properly it feeds your body. However, when a disease affects your heart, the arteries carrying the blood away from the heart become narrow or blocked. The valves leak, they can malfunction, and the heart muscles can become thin or thick. In addition, shorter electrical functions can cause many or too few beats. Hence, heart diseases that are not checked can cause breathlessness, fatigue, swelling, chest pain, and even death.

The size of the miniPUMP isn’t bigger than a postage stamp. It acts like a human heart ventricle of the muscular lower chamber. The components are custom made that fit into a thin piece of 3D printed plastic. The miniature valves open and close to control the flow of liquid and water rather than blood. Furthermore, the small tubes funnel the fluid just like arteries and veins. The muscle cells that make the heart tissue contract are made using small cell technology.

Replicates the Functions of the Heart

Michas also says that cardiomyocytes give the miniPUMP system a huge potential, helping them pioneer machines that are personalized medicines. Researchers can put a tissue with the disease on it and test any drug on it, seeing whether its ability to pump has been impacted.

It can help scientists assess new drugs for the heart long before clinical trials according to Michas.