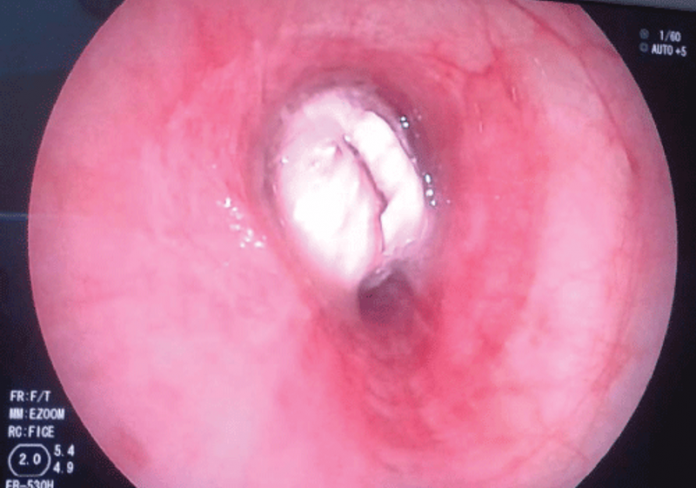 A previously healthy 29-year-old presented to the emergency department with severe traumatic brain injury after a road traffic accident. The patient was on his bike and missed a red traffic light which almost cost him his life. A car hit him and threw him 4 meters away, after which he endured a brain injury with right temporal extracerebral intracranic hematoma and splenic injury.

In the prehospital settings, the patient had good hemodynamics, pupils were equal, round and reactive to light. Moreover, the patient had a GCS score 3. However, the medical emergency team operating on the scene found it difficult to provide advanced airway management. The GCS score of the patient was 7 when he arrived to the emergency department. However, there was no alteration in pupil size. The patient was hemodynamically stable, ventilated with bag-mask, although, with poor respiratory exchanges and metabolic acidosis.

He was intubated promptly without any difficulty and mechanically ventilated. A cerebral CT was done for further investigation which showed a right fronto-temporal sphenoid fracture associated with a right temporal extracerebral intracraniac hemorrhage compressing the lateral ventricle. Abdominal CT further revealed an intraparenchymal lesion of the spleen. Whereas, the thoracic CT showed a round object in the main left bronchus. The object was of unknown nature and occupied the origin of the left superior pulmonary lobe.

The patient was brought to the operating room for a temporal craniotomy, a splenectomy and drainage of extracerebral intracraniac haemorrhage. Considering the presence of an unknown object in the lower airway, a flexible fiberoptic bronchoscopy (FOB) was performed, revealing a white round object in the main left bronchus that completely occupied the origin of the superior left bronchus.

The foreign object was removed with a Dormia basket. The basket with the object and endotracheal tube were removed together with rapid re-intubation. The respiratory exchange improved progressively after adequate manoeuvring and ventilation. The white round object was delivered to the police and identified as a packet of cocaine. However, there was no sign of cocaine intake in clinical and laboratory data. The patient was extubated two days after surgery and discharged after three days from the ICU with no complications.

A Rare Cause of Lower Airway Obstruction Due to Inhalation of Illicit Drug Packet https://clinmedjournals.org/articles/tcr/trauma-cases-and-reviews-tcr-1-017.php?jid=tcr