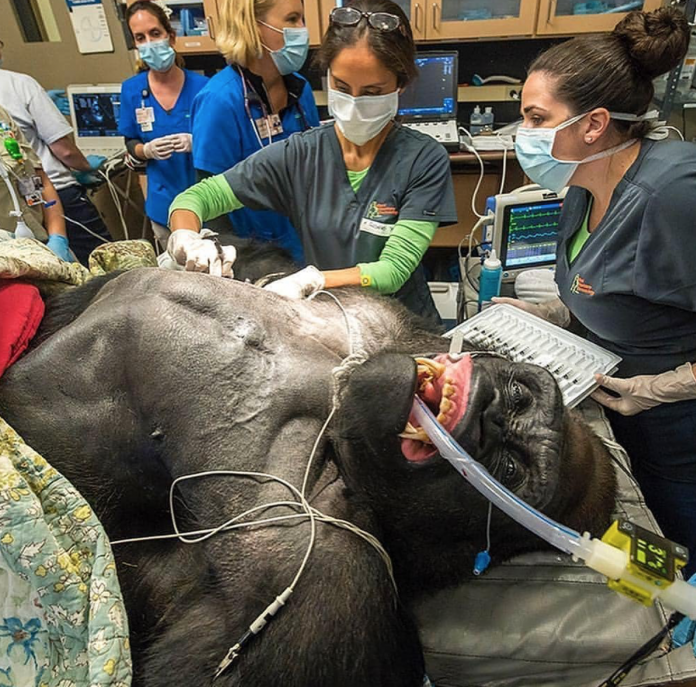 They can’t take any chances when there’s a 414-pound gorilla on the exam table.

Barney, a 25-year-old silverback gorilla needed his annual physical — weight taken, blood drawn, heart checked, and skin allergies testing at the zoo in Mimai, FL.
A pesky cough gave Barney’s caregivers another reason to give him a thorough examination. He’s also had a few cases of random hives in recent months.
Once Barney was under anesthesia, it took at least six people to load him onto a truck to be driven from his enclosure to the animal hospital. When he arrived his team of doctors was eagerly waiting to get started. At the count of three, they lifted him from the van and onto a gurney.

First he was weighed. Then he was intubated, his massive, hairy arms hanging lifeless next to him. A blood pressure cuff was placed on the pinky of his catcher’s mitt-sized hand. When doctors were sure he was completely sedated, he was rolled to the X-ray room, where they got photos of his chest, shoulders, knees and hips. Occasionally, Barney’s body shivered.
Then he was taken back to the exam where the prodding began. While some doctors drew blood, others examined his heart. The images popped up on the screen, while the sound of blood flowing through his heart — heard during an echocardiogram — filled the room. A dermatologist then began allergy tests, shaving a piece of Barney’s chest before sticking him with multiple needles.
Turns out Barney is allergic to plantains, mangoes and some types of grass — all reasons he may have broken out in hives.

Then came the bronchoscope. A pulmonary critical care doctor for humans, said he was asked to perform the procedure because gorillas have similar anatomy to humans. He said finding the mites was shocking.
Threading a scope down Barney’s throat showed dozens of tiny white mites crawling through his airways could clearly be seen on the monitor. Observers cringed.

With the scope, they were able to grab some of the critters and put them in containers to be tested. Meanwhile, doctors flushed out his airways, and he was given a dose of medicine to kill the mites.

Tapeworm had a neoplasm, the patient died

Stabbed in the eye after having a fight ver a parking lot!

In France, a 48-year-old male, new immigrant, known case of end-stage renal disease presented to the emergency room with complaints of difficulty in breathing....
Read more

If you grew up with grandparents, chances are you’ve probably seen them grapple with their memory on numerous occasions as well as,...
Read more

A 55-year-old woman was admitted to the hospital with a severe crush injury in both her legs after she got into a...
Read more