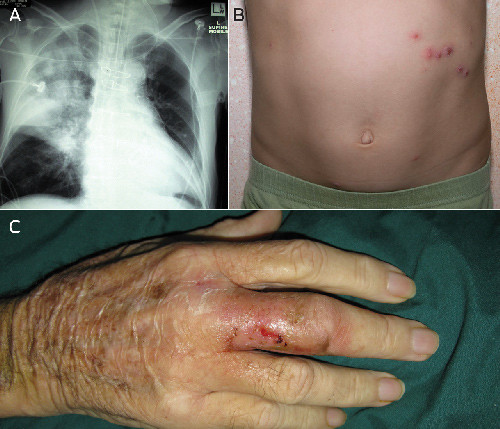 Melioidosis is a severe and life-threatening disease caused by a gram-negative bacterium Burkholderia pseudomallei. The bacteria are present in the soil or water of tropical and subtropical environments. Moreover, it manifests as a localized, pulmonary, systemic, or disseminated infection. However, misdiagnosis is very common due to the non-specificity of the symptoms.

This case report is of a 56-year-old woman with melioidosis with no travel history and public health investigation to determine the source. She reported to the hospital with fever, cough, and chest pain for two days. Her medical history revealed that she had polymyositis, rheumatoid arthritis, and diabetes mellitus. Furthermore, she stopped taking her immunosuppressive medications, which were, prednisone, methotrexate, and azathioprine, one month before the onset of the symptoms.

Doctors did a thoracic radiograph that showed an infiltrate in the lower lobe and right perihilar. In addition, a non-contrast CT showed consolidation of the air space in the right lower lobe, bibasilar air space densities, and small right pleural effusion. All these findings were consistent with pneumonia. In addition, the leukocyte count was also higher than the normal range.

Moreover, the doctors also did a blood culture before the administration of antimicrobial drugs, which identified B. pseudomallei. Additional blood cultures were also significant of the same organisms.

The doctors gave the patient ceftriaxone and azithromycin for four days since admission and changed the treatment to meropenem after the diagnosis of B. pseudomallei. Her symptoms improved and she was discharged after eleven days. However, she continued taking IV meropenem.

Three weeks after the treatment, the patient followed up with an increased leukocyte count and fever. Therefore, the doctors repeated the CT scan. It showed opacity at the right lung and bilateral interstitial process. The doctors admitted her again and gave her sulfamethoxazole/trimethoprim in addition to meropenem. Moreover, she was discharged after one week. The patient continued with the eradication therapy with a ten-week course of meropenem and a twelve-week course of sulfamethoxazole/trimethoprim.