Home Medical Cases Do not resuscitate! 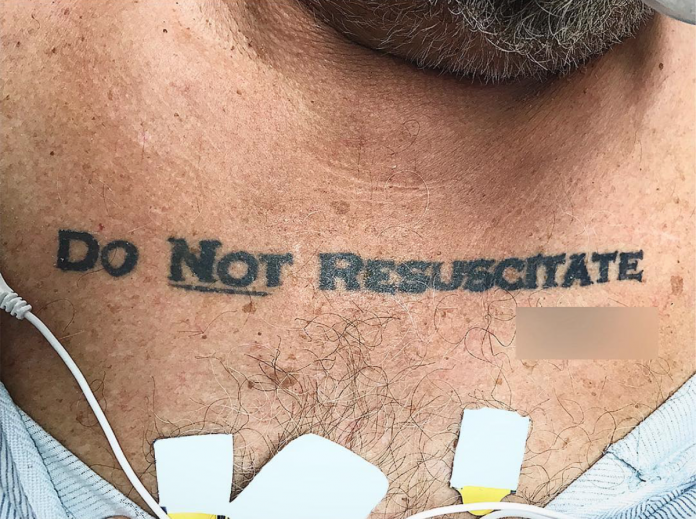 A bit of a dilemma – what would you do? An unconscious man came to a hospital with a ‘do not resuscitate’ tattoo, and doctors didn’t know what to do!! This 70-year-old man, with of chronic obstructive pulmonary disease, diabetes, and atrial fibrillation, came to a Florida emergency room unconscious, with no identification, and an elevated blood alcohol level.

Doctors tried to bring the man to consciousness but couldn’t. It was a complicated situation made even more complicated by a tattoo on his anterior chest that read “Do Not Resuscitate,” accompanied by his presumed signature. All efforts at treating reversible causes of his decreased level of consciousness failed to produce a mental status adequate for discussing goals of care.

Meanwhile, he was placed on empirical antibiotics, received intravenous fluids and vasopressors, and was treated with bilevel positive airway pressure.The ethics consultants advised to honor the patient’s do not resuscitate tattoo. They suggested that it was most reasonable to infer that the tattoo expressed an authentic preference. This patient’s tattooed request produced more confusion than clarity, but doctors were relieved to find he had also legally filed a written ‘Do not resuscitate’ order.

The patient’s clinical status deteriorated throughout the night, and he died without undergoing attempts at resuscitation with cardiopulmonary respiration or advanced airway management.