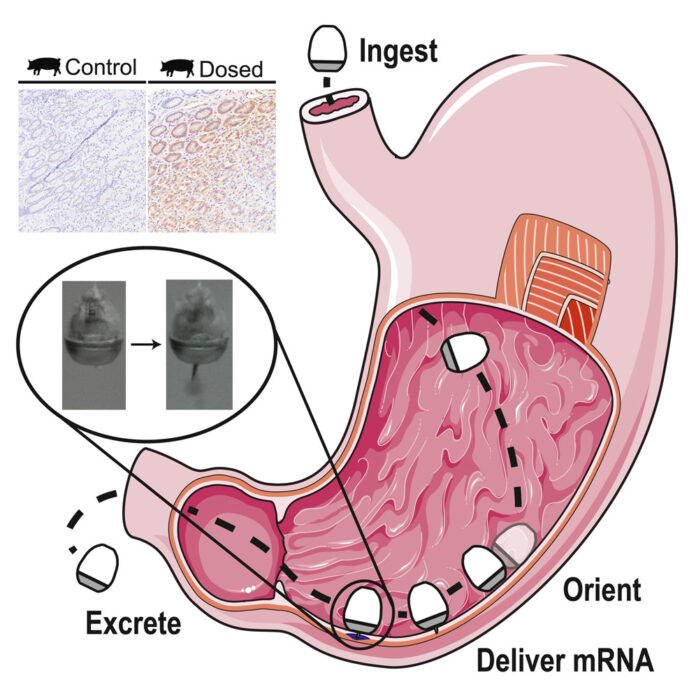 During the course of the pandemic, mRNA vaccine technology became widely popular among researchers. Although COVID-19 vaccines containing nucleic acids are highly effective, their mode of administration is only through the injectable route. This is a major hurdle for people suffering from needle phobia. Moreover, injectable vaccines require trained professionals for administration. Now, a team of MIT researchers have developed oral pills that can deliver therapeutic mRNA to the gut. The full study is available in the journal Matter.

Generally, nucleic acids are administered intravenously, subcutaneously, or intramuscularly as they can degrade easily in the digestive tract. In 2019, MIT Professors Giovanni Traverso and Robert Langer developed a capsule for the delivery of drugs directly to the digestive tract and bypassing degradation. Inspired by the leopard tortoise, the researchers shaped the pill in a dome shape. Moreover, the capsule possessed the ability to self-orient itself and inject the drug directly into the stomach lining. Initially, the scientists tested the capsule for the delivery of insulin. However, for nucleic acids’ delivery, they altered the design to surround the mRNA with polymeric nanoparticles. This not only protected the nucleic acid from degradation but also delivered them with higher efficiency.

Next, the researchers tested the newly developed oral pill in three pigs. They gave each pig three pills containing 50 micrograms of mRNA coding for an enzyme called Cre. Thus, each pig received a total of 150 micrograms of mRNA which is much higher than the amount present in COVID-19 vaccines. After a day of administration, the pigs were euthanized, and the researchers analyzed their stomach and liver tissue for the Cre enzyme.

Two of the pigs showed Cre expression in their stomachs. According to the study authors, the absence of the protein in one pig was likely due to ‘variations in the transfection of the mRNA particles’. Moreover, none of the pigs had the protein anywhere else in the body. Therefore, researchers next aim to alter the composition of the pills to increase uptake by organs.

If the researchers are able to create a systemic immune response using their oral pills, the tortoise-inspired capsules can likely help deliver COVID-19 vaccines in the future. Moreover, they hope to use the new approach for treating stomach ulcers and other gastrointestinal diseases.