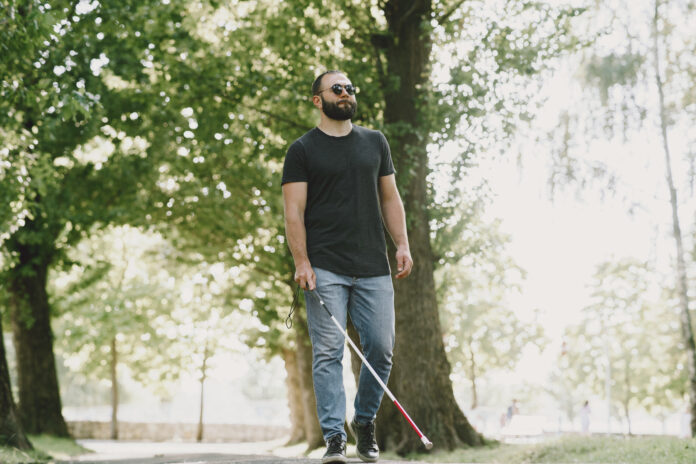 Improving the independence of people with handicaps is a major field of interest in scientific research today. But while scientists previously focused on creating devices to aid disabled people with their daily life, interest now seems to have shifted to restoring previously lost function.

A collaborative team of researchers from Spain, the Netherlands, and the USA has recently published a study detailing their work to help a blind participant “see”.

The 58-year-old female participant had been completely blind for 16 years and had no light perception. Through a surgical procedure, researchers inserted a microelectrode array consisting of 96 units into her visual cortex. The goal was to give her “artificial sight”, a plan that depended on the appearance of points of light called phosphenes.

What are phosphenes and how can they help blind people?

In the study, the researchers counted on the participant’s familiarity with phosphenes to help her recognize outlines of different objects. Using the microelectrode array, they stimulated various points of her visual cortex so that she could perceive particular patterns of phosphenes. While it took her a while to distinguish between spontaneous and stimulated ones, once trained, she was able to distinguish various letters including i, L, C, V, and O with 70% accuracy and play different video games, including shooting with a Simpson’s character.

Moreover, after a few months, the participant received a head-mounted camera with a visual encoder that helped her “scan” objects in front of her by stimulating her implanted electrodes. Using the camera, she was able to distinguish white squares moving around a computer screen, and distinguish between black and white bars on a cardboard piece with 100% accuracy.

According to the study’s lead Eduardo Fernández, MD, Ph.D., from the University Miguel Hernández:

“These results are very exciting because they demonstrate both safety and efficacy and could help to achieve a long-held dream of many scientists, which is the transfer of information from the outside world directly to the visual cortex of blind individuals, thereby restoring a rudimentary form of sight.”

“Although these preliminary results are very encouraging, we should be aware that there are still a number of important unanswered questions and that many problems have to be solved before a cortical visual prosthesis can be considered a viable clinical therapy.”