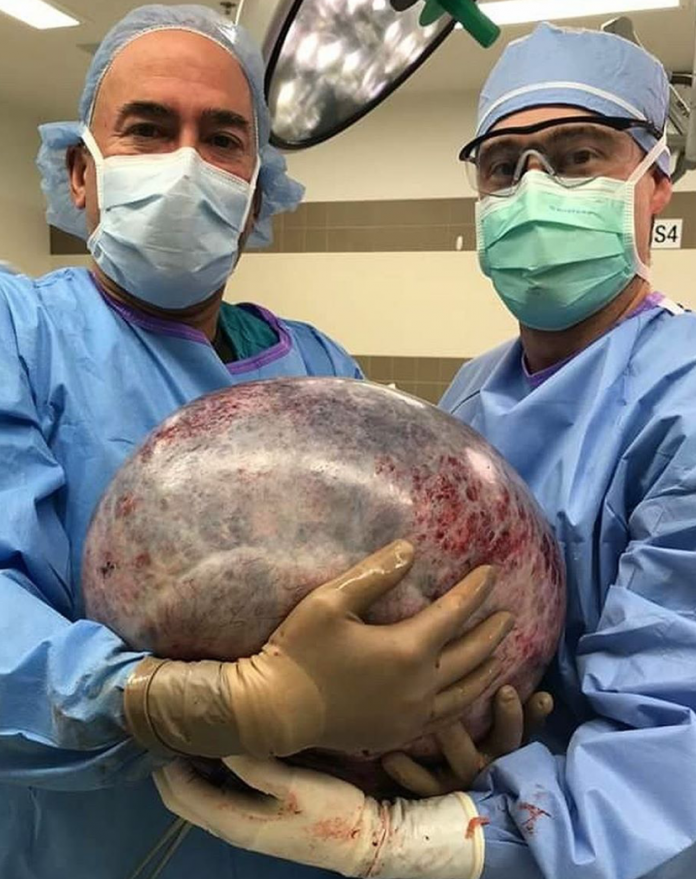 Ever seen something like this? An enormous 40 pound (18 kg) ovarian cyst — The fastest way to lose weight without dieting!!
After complaining of abdominal pain and a variety of other symptoms, the doctors first thought that all of her symptoms were due to the patient being overweight. Big time miss there.
After her symptoms became worse, she chose to go see another doctor and discovered there was a child size cyst growing on one of her ovaries… 44 lbs to be exact. It destroyed one of her Fallopian tubes and ovaries; additionally, smashed all of her internal organs into her spine.

Ovarian cysts are rarely cancerous, but they can pose serious health risks if left untreated. Patients are often bedridden and have difficulty breathing as the cyst pushes against organs.
This ovarian cystadenoma is a common slow-growing epithelial ovarian tumor that in most cases has low malignancy potential, hence being benign.
It is not cancerous and do not spread or metastasize and usually presents as a single mass within the ovary, or can occur as multiple masses within a single ovary.
Due to its huge size, the patient experiences symptoms, such as abdominal pain, vaginal bleeding, and increased abdominal size.

Although the condition is extremely rare, it is a potentially dangerous in its massive form if not timely diagnosed by imaging studies (ultrasound, CT, biopsy of a specimen) and managed properly by surgery.
Complications of that huge tumor includes rupture of cyst within the abdomen, or torsion of the ovary. Therefore, they must be surgically excised on time.

Depression affects over 264 million people of all ages across the globeThe World Health Organization (WHO) estimates 80,000 people die from suicide...
Read more

Parents may have to rethink stopping their kids from playing video games in the future. A study published in the journal Frontiers...
Read more

Choir singing is a superspreader of COVID-19, according to reportsCompared to speaking, singing produces a greater number of aerosols and water dropletsResearch...
Read more