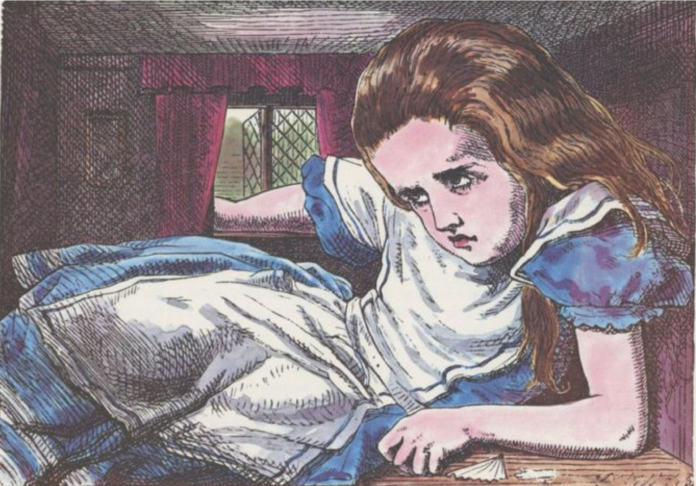 Ever thought that your favorite childhood movie would manifest itself in the real world? Look no further, as this is an extremely rare case of Alice in Wonderland (AIWS) syndrome.

This syndrome is characterized by a warped perception of reality, which includes a distorted body image, visions, and experience of time.

A 68-year-old  professional jazz musician presented to the neurology outpatient clinic with peculiar visual symptoms that included objects slowing down or speeding up like “a Charlie Chaplin movie”.Furthermore, sometimes the objects did not move at all, as well as them being perceived as exceptionally bright. Additionally, his array of visual symptoms included observing objects swiftly changing colors, called “fairground lights”; and objects appearing larger or smaller than their usual size. These symptoms were progressive in onset and were mild when his visual symptoms initially manifested. With the passage of time, they progressively worsened. On thorough examination, he was found to have open-angle glaucoma with intraocular pressure of 39/27 mmHg. His visual acuity was normal, however, there were numerous field defects inconsistent with his symptoms.

He had previously presented to the ophthalmic department with complaints of defective size, depth and perception, as well as a migraine, with tight pulsating sensation.

All of the aforementioned clinical manifestations were debilitating and a hindrance in the man’s life, to say the least. Owing to the loss of sensation, and distorted gait; he was unable to continue playing the jazz flute and the saxophone. His speech became increasingly incompressible as he faced difficulty in constructing sentences and enunciating. His partner reported major behavioral and emotional changes as well.

Astonishingly, baseline investigations and MRI head came out normal, while his condition continued to deteriorate. A repeat MRI head was ordered which revealed potential signs for a tentative diagnosis of Creutzfeldt Jakob Disease, the Heidenhain variant. The increased levels of tau protein in the CSF pointed towards this diagnosis.

An ending similar to one of the numerous versions of the highly popular movie, Alice in Wonderland.

All other potential diagnoses were ruled out, as the patient’s family history of CFJD was negative.

Unfortunately, no treatment options were possible, due to the extreme disease progression. As per the patients’ wish, he was sent home, where he passed away 2 months later. His family did not give consent for the autopsy.