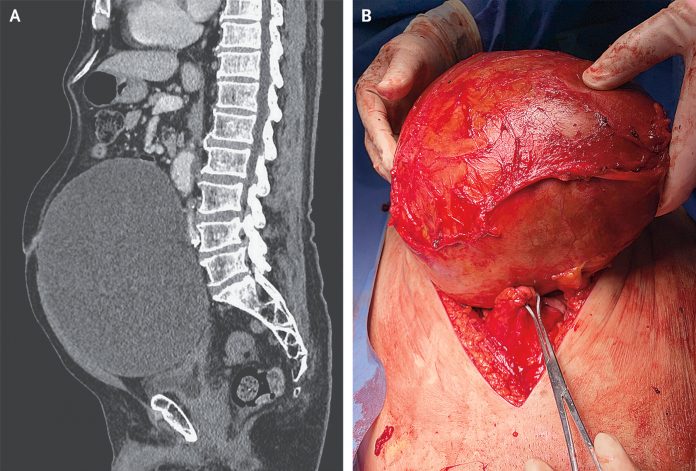 An 80-year-old, otherwise healthy man presented to the emergency department with complaints of bloating, constipation, and abdominal distension. He had also lost 5 kgs unintentionally during the past 8 months. The patient had no other complaints.

Physical examination revealed a distended abdomen secondary to a mass that extended from the epigastrium to the pelvis. There was no tenderness, however, it was dull on percussion. Initially, the doctors suspected a distended bladder. Therefore, they inserted a urinary catheter which drained only a small amount of urine. The abdominal distension and the mass persisted.

A contrast-enhanced abdominopelvic computed tomography scan identified a large cystic mass. Therefore, a decision was made to perform surgery to remove the mass with the consent of the patient.

Intraoperatively, the surgeons found a large mass involving the dome of the bladder. However, the mass did not adhere to the bowels or mesentery. It measured 30 cm at its largest dimension.

The surgeons sent a sample from the resected mass for histopathological analysis. It showed a urachal mucinous cystic tumor with low malignant potential. However, it did not show any evidence of invasive carcinoma.

Postoperatively, the patient recovered well without any complications.

At the 3-month follow-up, he had recovered completely and was free of any symptoms. The abdominal examination was also normal without any distension.

Urachus is a vestigial remnant. Ideally, it regresses to form the median umbilical ligament. However, in rare cases, it may not regress and give rise to urachal fistula, cyst, or neoplasms. The latter is a rare manifestation and may get diagnosed later in life during adulthood. Urachal neoplasms comprise less than 0.5% of neoplasms of the urinary bladder. In some individuals, the diagnosis is incidental; while others may present with symptoms such as abdominal mass and distension, pain, hematuria, urgency, or umbilical discharge.  Surgical excision is the treatment of choice. However, prophylactic excision of urachal anomalies in children is not recommended.