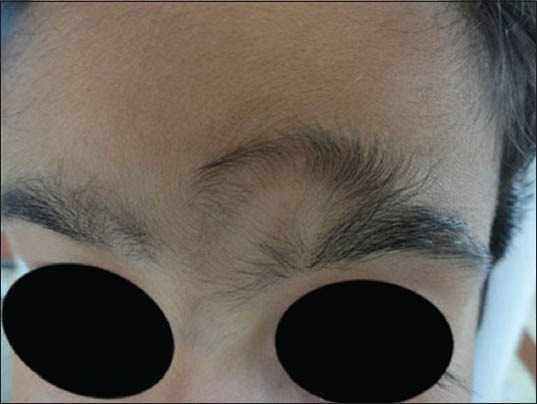 A 6-year-old girl presented to the outpatient pediatric dentistry department for a routine dental check-up. The girl had no active complaints and no significant past medical history. However, on inspection of the face, double eyebrows were noticed.

The girl had no gross abnormality or gross asymmetry of face, eyes, ears, or neck. Neither did she have any visible swelling or lymphadenopathy. Bilaterally, her eyebrows were sparser on the medial sides as compared with the lateral sides. However, the eyebrows did not have any pathology except an additional layer of hair present above the eyebrow on the left side giving appearance of a double eyebrow.

The second layer of the eyebrow was just above the first layer. The distribution and density of hair in the second layered eyebrow was dissimilar. However, the rest of the examination was normal with no other abnormalities or dermatological condition.

Family history was unremarkable and there were no similar findings in any of the other family members including parents.

The child had not received any treatment for double eyebrow.

Serological investigations including complete blood count and liver function test were normal. Urine analysis was also unremarkable and so was the abdominal ultrasound.

Since the girl did not have any other clinical manifestation, her presentation and history concluded the diagnosis of double eyebrow.

Normally, the eyebrows are at the intersection of the forehead and the upper lid. They start, between 8-10 gestational week, medially just inferior to the orbital margin and end laterally above the orbital margin.

Since the deformities of eyebrows can be associated with genomic disorders and syndromes, therefore, it is imperative to have a thorough history and detail evaluation to rule out other diagnoses.