Home Medical Cases Yellowish Discolouration of the Skin Due to Spinach, Sweet potatoes, and Oranges! 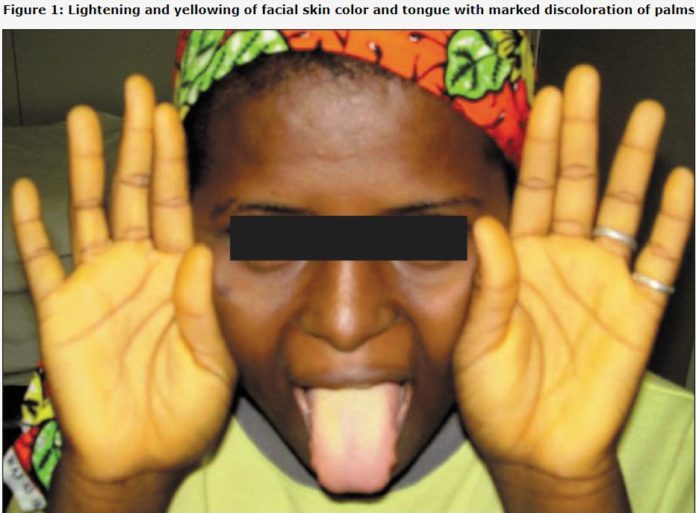 A 32-year-old African female presented to the outpatient clinic with complaints of yellowish discolouration of her skin for the past 3 years. The skin discolouration began with the palms, followed by her soles. Eventually, the discolouration involved other body parts. Moreover, it also increased in severity. She noticed lightening of her original dark skin complexion. Recently, she observed that her face and tongue became more noticeably yellow.

However, her medical history was insignificant. She had no other associated symptoms nor the patient got diagnosed with any illness. Also, family history was insignificant.  Her dietary habits revealed that she loved to eat oranges, sweet potatoes, and spinach. During the season, she would consume at least a dozen oranges in a day. Moreover, her daily diet comprised largely of spinach and sweet potatoes in one or the other way.

Physical examination revealed a pale face which appeared yellowish when compared with her natural skin colour with an orange hue. The tongue also showed yellowing. However, the palms and soles were markedly yellow. The rest of the examination was normal. The patient had no other complaints or positive findings.

Since the patient lacked any relevant history or examination finding, except for her diet, which was rich in carotene, the doctors made a working diagnosis of diet-related carotenemia.

Since diet-induced carotenemia can be associated with elevated levels of vitamin A (as carotene converts to vitamin A), a test was performed. The patient had normal vitamin A level.

They advised the patient to avoid or restrict her intake of high-carotene foods.

How to diagnose carotenemia?

Carotenemia is a clinical diagnosis. Therefore, a thorough history and physical examination are imperative to rule out differentials. However, if confirmation is needed, the patient can undergo serological testing of serum beta carotene and vitamin A levels. The former would be high, while the latter can either be normal or high in cases of diet-induced carotenemia. Moreover, the liver function tests would be normal.

How to differentiate jaundice from yellowish discoloration from carotenemia?

Carotenemia spares the sclera whereas jaundice almost always involves the sclera. Moreover, in carotenemia, the patients have normal urine colour and history of carotene-rich foods.

Which foods should the patient avoid/restrict?

It is imperative for the physicians to be aware of this diagnosis to avoid misdiagnosing it. A premature diagnosis of jaundice in such patients can lead to unnecessary anxiety and workup.