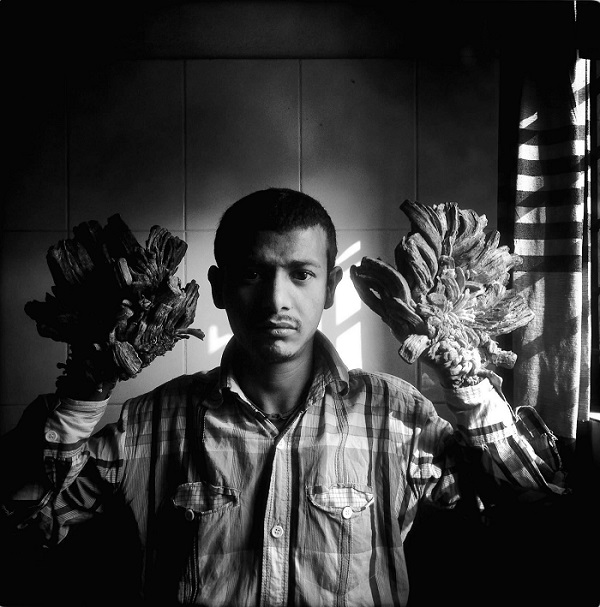 Hearing of a tree man quickly gets us thinking about all those fictional characters we see on screen, for instance “Groot” from the movie series Guardians of the Galaxy. We consider existence of such beings beyond reality but what if nature too was inspired a bit by fantasy, because the picture you see above is not a fictional character but a male in his 20s from Bangladesh.

Abul Bajandar paddled vans for a living. It was in 2005 on a rainy day when he first noticed the warty “roots” growing on his forearms and legs. Over the next few years, these sprouts gathered magnitude rendering his hands and feet completely useless. He was diagnosed with a rare condition called epidermodysplasia verruciformis. He underwent at least 25 surgeries to remove the warts. His condition worsened in 2018 after which he requested to get his arms amputated because the pain was unbearable.

What is epidermodysplasia verruciformis?

Epidermodysplasia Verruciformis or “Tree Man Syndrome” is a rare skin disorder inherited as an autosomal recessive trait. It is characterized by abnormal susceptibility to Human Papilloma Virus. The subsequent infections cause the development of wartlike lesions and plaques resembling tree bark, on trunk, forearms, hands and feet.

“There have been only a handful of such extreme cases of this rare condition called Epidermodysplasia Verruciformis”
says Dr. Michael Chernofsky, a senior hand and microvascular surgeon at Hadassah.

This disease is a complex interplay between the specific virus and your immune system. HPV types 5 and 8 are predominantly associated with this condition. These are found in 80% of the normal population as asymptomatic infections, but genetic anomalies make these patients more vulnerable to skin cancer and HPV infections.

This condition results from a mutation in either EVER1 or EVER2 genes present on chromosome 17. These genes are involved in regulating intracellular reserves of zinc which is an important cofactor for viral growth. Mutations lead to increased vulnerability to viral infections.

While most people fear the condition due to its bizarre cosmetic outlook, it is not contagious. The doctors examine the patient without any issue.

Is there a cure?

There is currently no cure for this condition. The tree like outgrowths can be surgically removed but they have the tendency to grow back again. Depending upon the severity of the condition and the magnitude of warts, it may be imperative to perform surgery twice a year or more. Suggested treatments using acitretin and interferons are underway.