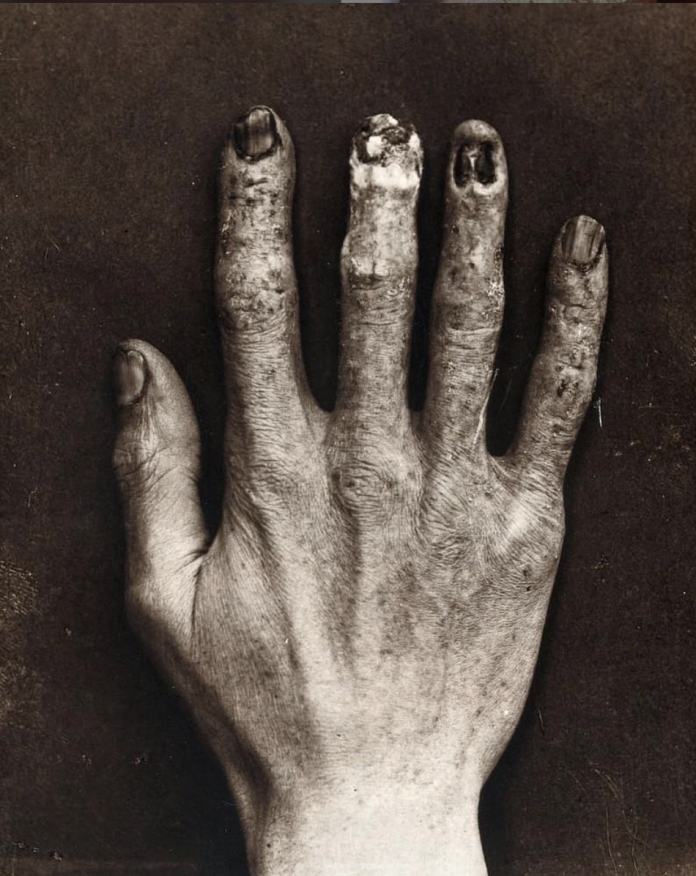 This is the hand of Clarence Madison Dally (1865–1904), a glassblower who worked with Thomas Edison. He would test X-ray tubes he made on his own hands and died after developing an aggressive cancer, which also resulted in him having both of his arms amputated in an unsuccessful attempt to save his life. Shortly after his death, Thomas Edison abandoned his research on X-rays.

Following Wilhelm Röntgen’s work on X-rays in 1895, Clarence and his brother Charles worked on the development of the Edison X-ray focus tube, developing the fluoroscope using calcium tungstate. The Edison fluoroscope produced sharper images than the Röntgen fluoroscope, which used barium platinocyanide. At the time, the levels of X-rays produced were not believed to be dangerous. However, Edison noted how “the X-ray had affected poisonously my assistant, Mr. Dally.” By 1900, Clarence Dally was suffering radiation damage to his hands and face sufficient to require time off work. In 1902, one lesion on his left wrist was treated unsuccessfully with multiple skin grafts and eventually his left hand was amputated. An ulceration on his right hand necessitated the amputation of four fingers.

These procedures failed to halt the progression of his carcinoma, and despite the amputation of his arms at the elbow and shoulder, he died from mediastinal cancer. Dally is thought to be the first American to die from the effects of experimentation with radiation. Following this, Thomas Edison abandoned his research on X-rays. In 1903, Edison said “Don’t talk to me about X-rays, I am afraid of them.”

Middle Age: When lovesick, call a doctor or a cupid?

Reading this will give you pain.