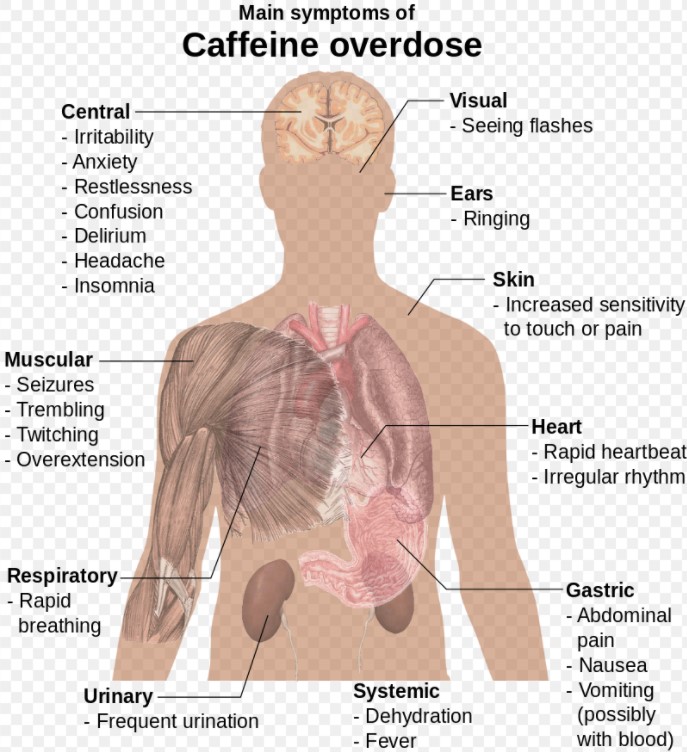 A healthy teenager attempts suicide by overdosing on pills containing caffeine- A case of caffeine overdose!

An otherwise healthy, 18-year-old, Japanese male attempted suicide by ingesting 60 caffeinated tablets. The total caffeine content was approximately 6.0 g.  He was brought to the emergency department 80 minutes later when he developed nausea and headache as a result of caffeine overdose.

Past history of the patient revealed maladjustment to high school after he hit his friend due to which his school principal suspended him for 10 days. Besides this, he had no remarkable personal or family history. The patient was a non-smoker with no significant medical or psychiatric history. However, examination revealed a scar on his wrist demonstrating a healed cut.

In the emergency department, his Glasgow Coma Scale score was 15, blood pressure was 152/82 mmHg, pulse was 139 beats/min, respiratory rate was 22/min, saturation of oxygen was 100% on room air, and body temperature was 36.8 °C.

The doctors in the ER performed an electrocardiogram (ECG) which showed sinus tachycardia at a rate of 139 beats/min with QT prolongation (QTc 617 ms).

In the ER, the doctors performed gastric lavage of 1600 mL and administered 30 g of activated charcoal through a nasogastric (NG) tube. Additionally, they administered 20 mmol of potassium at the rate of 20 mmol/hour. Subsequently, they shifted the patient to the intensive care unit.

To score the agitation, the patient scored + 2 on the Richmond Agitation-Sedation Scale. The doctors suspected and made a working diagnosis of acute caffeine poisoning. The patient received dexmedetomidine (maximum 0.7 µg/kg/hour).

After 7 hours, his serum potassium and lactate levels normalized to 3.7 mmol/L and 1 mmol/L, respectively. Moreover, his ECG also improved, i.e. the QTc normalized.

After 12 hours, the doctors stopped the administration of dexmedetomidine. However, the patient had persistent suicidal thoughts and ideation, therefore, he required psychiatric ward admission for protection. He admitted having thoughts of dying since high school.

However, by the third day of admission, he had improved and no longer had suicide ideation, therefore he was discharged home.

Normally, with caffeine doses of 0.05 g to 0.2 g, individuals may experience some mild stimulation, however,  acutely ingested doses of more than 5 grams can be lethal. However, the reported cases with fatal caffeine intoxication are rare. Moreover, the absorption and half-life of caffeine within the body varies from person to person and is dependent on multiple factors including gender, age, oral contraceptives’ use, pregnancy, and smoking. Therefore, lethal caffeine doses may greatly vary from one person to another.