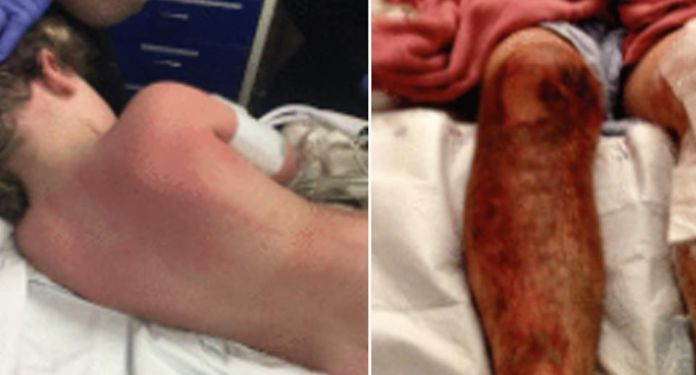 The accident happened when he was playing nearby a family member pouring and mixing cement.

He accidentally walked under the wet cement dispenser and got wet cement over his head and torso. The boy experienced burning pain after a little while and his skin was red. He was immediately taken to a nearby healthcare facility after the incident. Staff at the facility washed his skin with polyethylene glycol, an organic substance with further decontamination and irrigation to prevent ongoing alkali burn. The doctors at the facility transferred him to Vanderbilt University Medical Center in Nashville, Tennessee to evaluate whether he needed further treatment for the wounds.

Examination showed superficial burns on the boy’s head, neck and torso. It was also noted that the cement mixture had not been washed off completely. Visible particles of cement were clinging on to the boy’s skin and hair.

Cement, if left on the skin for very long can cause severe chemical burns.

Cement is made up of a compound called calcium oxide which when mixed with water becomes highly alkaline. Wet cement has a pH of 14, making it highly alkaline. Contact with cement does not immediately cause the skin to burn. But, it can causes burns if the material is left on the skin for too long. Moreover, if there is prolonged contact with the material such as in instances of kneeling in cement while pouring.

According to the authors, wet cement burns are rarely seen in children, making it a rare case. They further wrote that, “wet cement is often a poorly recognized cause of alkali burns”. In this case, the patient was decontaminated early enough, therefore, no surgical interventions were required. The boy made full recover after being discharged from the hospital.