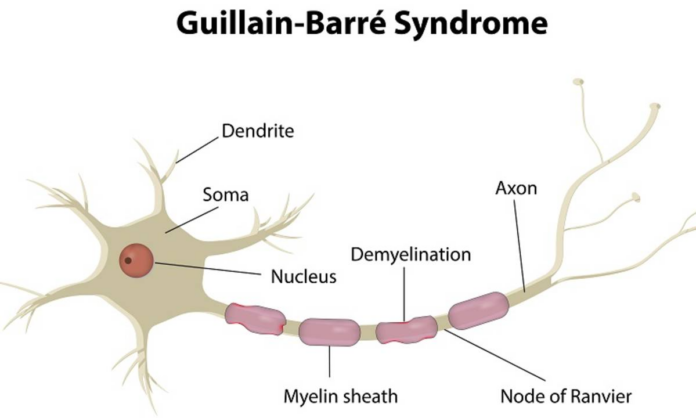 This article describes the case of a 19-year-old male student who presented with complaints of a 2-day history of progressive weakness in the lower limbs. After medical investigations, doctors diagnosed the patient with paraparetic Guillain-Barre syndrome. The 19-year-old developed progressive and symmetric weakness in the lower limbs following an upper respiratory tract infection. The patient’s post-infectious, monophasic, acute and symmetric course was significant for the diagnoses of paraparetic GBS. The diagnosis was confirmed by CSF and electrophysiological findings.

GBS is known to be the most common cause of acute flaccid paralysis and is typically characterised by acute ascending bilateral symmetric weakness of varying degrees in the limbs. However, it may also present with symptoms limited to specific parts of the body. These symptoms are known as the “GBS variant” or “topographic variant” with autonomic and respiratory involvement. Patients are diagnosed based on clinical history, electrodiagnostic tests and CSF examination. Neuroimaging may be required in some cases to rule out differential diagnoses. In this case, the 19-year-old was managed conservatively and showed full recovery after a month and a half.

A 19-year-old male patient presented with complaints of a 2-day history of progressive weakness in his lower limbs. The patient noticed a heaviness in one of his legs soon after waking up and also faced difficulty in lifting them. He also couldn’t wear his slippers when he tried to because he had difficulty holding them on his feet. By evening his condition worsened to a point where he needed his parents’ assistance to get up from a chair. However, there were no symptoms of diplopia, dysphagia, dysarthria or facial weakness. The symptoms in his lower limbs worsened the next day and he needed support from his parents while walking. Though there were no signs of bladder or bowel involvement, sensory symptoms or upper limb weakness. Similarly, 10 days before the onset of his symptoms, the patient experienced rhinorrhea and a slight fever with a history of 3 days. His medical history was not significant for any medication history, bug bite, surgery, recent trauma, shortness of breath, weight loss or back discomfort [1].

When the patient arrived at the emergency department his Glasgow Coma Scale score was 15/15. His body weight was 65 kg, height 181 cm, blood pressure 110/80 mm Hg, pulse 88/min, temperature 98 degrees Fahrenheit and respiratory rate 16/min. There were no signs of clubbing, cyanosis, jaundice or pallor. The tone and bulk of his limb muscles did not show any significant difference. There were no signs of clubbing, jaundice or pallor. Examination did not show any significant difference in the bulk of the limb muscles. However, examination showed reduced the in the bilateral ankle and knees. It was normal in the rest of the joints. Power was 5/5 in all the joints of the upper limb. Lower limb examination showed bilateral hip flexion 4/5, knee flexion 4/5, knee extension 4/5, ankle dorsiflexion 2/5 and planter flexion 3/5. The plantar response on both sides was down going.

Doctors further referred the patient for chest X-ray and electrocardiogram. There were no significant findings on both the chest X-ray and electrocardiogram. Other laboratory results including human immunodeficiency virus (HIV), hepatitis B and C, syphilis, serum-angiotensin-converting enzyme and thyroid-stimulating hormone levels were unremarkable. The patient was also advised an MRI of the dorsal and lumbosacral spine which showed no significant abnormalities that would trigger the clinical presentation. A nerve conduction test that was performed on the 8th day of the onset of symptoms showed a pattern of motor axonal neuropathy in the lower limbs. The test findings were unremarkable in the upper limbs. Both the upper and lower limbs preserved sensory amplitudes. Based on these findings, the patient was diagnosed with paraparetic Guillain-Barre syndrome.

Doctors initiated immunomodulatory medication based on the degree of the patient’s disability. The patient was managed conservitavely with physiotherapy sessions. The patient was discharged after 7 days and showed moderate improvement in motor power. He was called back for a follow-up after 1.5 months and his lower limbs power was 5/5 with no residual defects.