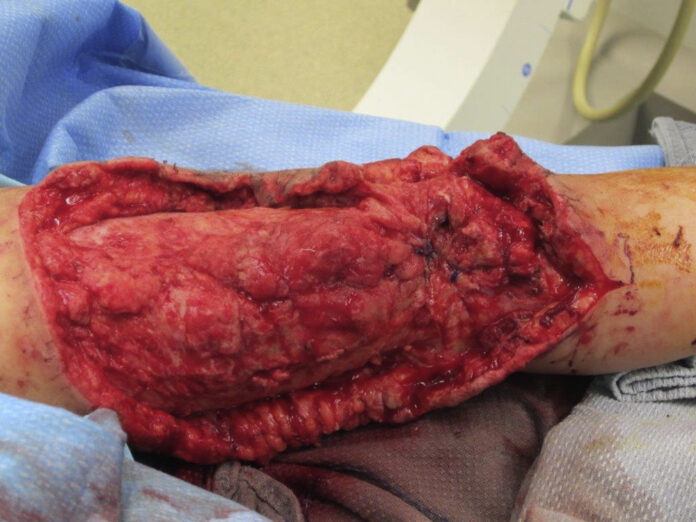 This article describes the case of a 4-year-old female patient who presented with an injury in her left lower extremity after a lawnmower rollover accident. Physical examination showed that the patient had a degloving injury to the left thigh with amputation of the medial side of the forefoot. Examination also showed signs of gross contamination with grass and dirt. The wound over the left knee measured 12 cm x 8 cm in size. The extensor mechanism was disrupted partially and the medial condyle was exposed. The patient had to undergo an osteoarticular allograft reconstruction for stabilisation of the injury.

Doctors advised a radiograph which showed a medial femoral condyle fracture with unicortical fracture of the medial tibial plateau. Multiple fragments of the medial femoral epiphysis were also evident with extension into the physis and disruption of portions of medial femoral metaphysis. However, the overlying articular cartilage was still present despite the medial femoral condyle being fragmented. With the gross contamination and presence of severity of soft tissue injury, doctors counselled the patients parents regarding the risks and benefits of a limb salvage procedure. 11 hours after admission, debridement and irrigation were performed.

Intraoperative findings were consistent with unicortical frature of the medial tibial plateau, fracture of the medial femoral condyle, complete obiliteration of the MCL complex and medial capsule and a defective vastus fascia medially. The doctors performed three debridement and irrigation procedures as there was necrosis of the edges of the skin. There were no significant findings in the intraoperative cultures. The patient was advised a definitive reconstruction procedure.

4 months after the medial femoral condyle reconstruction, an osteoarticular allograft was performed. The sutures were removed at 2 weeks. At this point the patient was placed in a hinged knee brace which allowed 0 to 45 degrees range of motion. 4 weeks after the construction, the patient was started on active and passive range of motion exercises under the guidance of a physiotherapist. At 3 months follow up the patient was allowed weight bearing with a knee brace protection, which progressed to full weight bearing at 6 months. The osteoarticular allograft was well incorporated at 1-year follow up.

Osteoarticular allograft reconstruction of post-traumatic defect of distal femur in a pediatric patient: A case report and literature review https://www.researchgate.net/publication/307858702