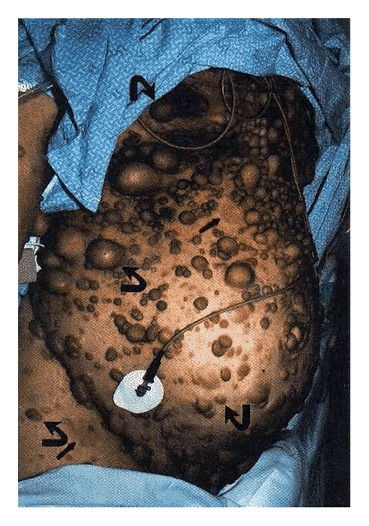 Neurofibromatosis is described as a genetic disorder of the nervous system that affects the formation and growth of nerve cells. Further causing the tumours to grow on nerves. The condition is either hereditary or may happen because of a mutation in the genes. The tumours are usually benign but can also sometimes become cancerous. Neurofibromatosis is divided into Type 1 (NF1) and Type 2 (NF2). Type 1 causes changes in the skin and deformed bones. It usually begins during childhood with the symptoms may present at birth. Type 2 (NF2) presents with hearing loss, poor balance and ringing in the ears. The symptoms often begin during teenage years. Schwannomatosis is the rarest form of neurofibromatosis which causes intense pain.

Doctors diagnose the condition based on the symptoms. NF1 and NF2 can also be diagnosed with genetic testing

Currently there is no cure for neurofibromatosis but treatment can help control symptoms. Depending on how serious the disease is, treatment includes surgery, radiation therapy and medicines. This article describes the case of neurofibromatosis type 1 in a 45-year-old woman who presented with severe exacerbation of asthma. Neurofibromatosis associated lung disease generally presents with non-specific symptoms, dyspnoea on exertion, chronic cough, chest pain and shortness of breath, as with this case. Examination showed the presence of inguinal freckling (Crowe’s sign), cafe au lait macules (straight arrows) and neurofibromas. The cafe au lait patches were present since birth, whereas the neurofibromas appeared during puberty.

The tumours are usually noncancerous (benign), however, sometimes can also be cancerous (malignant). While the symptoms are often mild, complications include, severe pain, loss of vision, cardiovascular problems, learning impairment and hearing loss.

Treatment focuses on early management of complications and encouraging healthy growth and development of children affected by the disorder. Symptoms of large tumours pressing on nerves can be reduced with surgery. Some people may even benefit from other therapies, for example, stereotactic radio-surgery and medications for alleviating pain. Other new treatments are also being developed.