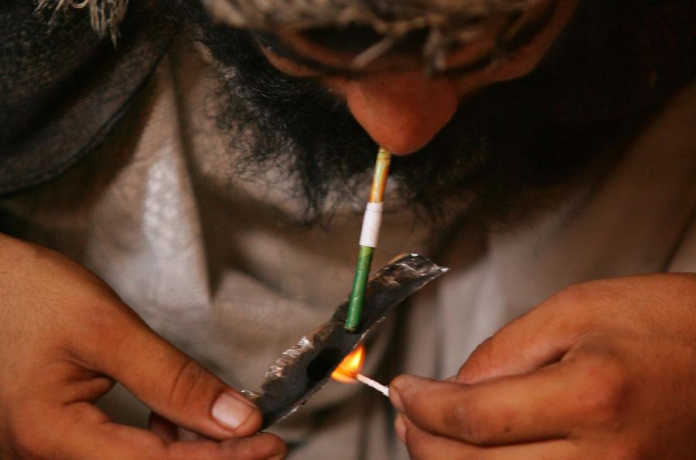 A 34-year-old man reported to a community hospital in Vancouver, Canada with fatigue and diffuse abdominal pain. The patient had been in pain since a month with associated anorexia and weight loss of 2.7 kg. However, the symptoms were not associated with fever or night sweats. He also complained of constipation but, no hematochezia, melena or diarrhea. His medical and travel history were unremarkable.

He was originally from India but was living in Canada since the age of 13. Moreover, he was living with his wife and parents, running a family business. For his recent pain, he had been prescribed with acetaminophen with codeine, ibuprofen and gabapentin. He did not use illicit drugs, products containing nicotine or alcohol.

The patient was given morphine for pain and was discharged home with pantoprazole, 40 mg per day.

Differentials included thalassemia because of the presence of microcytic anaemia.

However, the results of haemoglobin electrophoresis were pending. Specimens of gastric biopsy showed evidence of H. Pylori infection. Moreover, the symptoms did not abate despite treatment with lansoprazole, amoxicillin, and clarithromycin.

However, during the next 6 weeks the patient visited the emergency department thrice for ongoing abdominal pain. For further investigation the patient was referred to a gastroenterologist for capsule endoscopy; the results were normal. He was readmitted to the hospital.

Since his last hospital visit, he lost an additional 11 kg of weight with headache on the right side that last for 2 to 3 hours. There was no associated nausea, photophobia or neck stiffness. He remained afebrile and all additional work up including MRI of the head and spine, chest radiography, urine cultures, blood cultures, lumbar puncture, serum protein electrophoresis, tests for HIV infection, syphilis, Hepatitis A, B and C virus were unremarkable. After being evaluated by an infectious disease specialist, rheumatologist and neurologist, he was discharged with an unclear diagnosis.

A week later, the patient returned to the hospital for an episode of generalised seizure. Moreover, he had subsequent recurrent seizures with interictal somnolence despite treatment with phenytoin and diazepam. He was intubated and shifted to the intensive care unit. Neurological examination and CT of the head suggested no focal lesions.

Urine screening was positive for opioids, consistent with his prescribed medication/opioid abuse. Lead poisoning seemed to be the likely diagnosis with the presenting complaints and diagnostic test results.

The number of cases of lead poisoning appear to be increasing with time. However, further research is needed to identify the prevalence of illicit drug supply (lead contaminated opium) in North America. The patient agreed to begin opioid-agonist therapy with buprenorphine–naloxone.